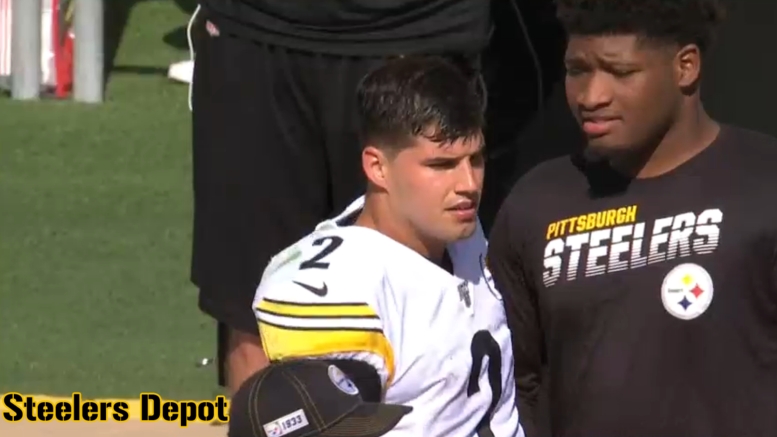 The air has changed around Pittsburgh. Around this time last week, many were devastated by the season ending injury to Ben Roethlisberger but were excited by what they had seen in his backup Mason Rudolph. Mix in the acquisition of Minkah Fitzpatrick and the words ‘lost season’ were nowhere to be found.

Now, a week later and a few days following Rudolph’s first NFL start, the words lost season have been beaten like a dead horse. The Pittsburgh Steelers dropped to 0-3 following a 24-20 loss to the San Francisco 49ers, the defense looked opportunistic but Rudolph and the offense looked far from playoff caliber.

After an exciting second half performance against the Seattle Seahawks, Rudolph looked very average against the 49ers. He almost looked like a third-round pick making his first career start on the road against the second ranked defense in the NFL.

What’s that you say? You mean Rudolph looked like that because he is a third-round draft pick making his first career start away from home against the second ranked defense in the NFL?

Context is always important and considering the circumstances that Rudolph was dealing with, it would be foolish to expect him to look like Tom Brady or even a prime Ben Roethlisberger. This did make me curious though to investigate how Rudolph’s numbers compared to other quarterbacks in similar situations as the one he found himself in last Sunday.

There have been 55 quarterbacks who have made their first career start on the road since the 2009 NFL season and documented below are their numbers from those games. 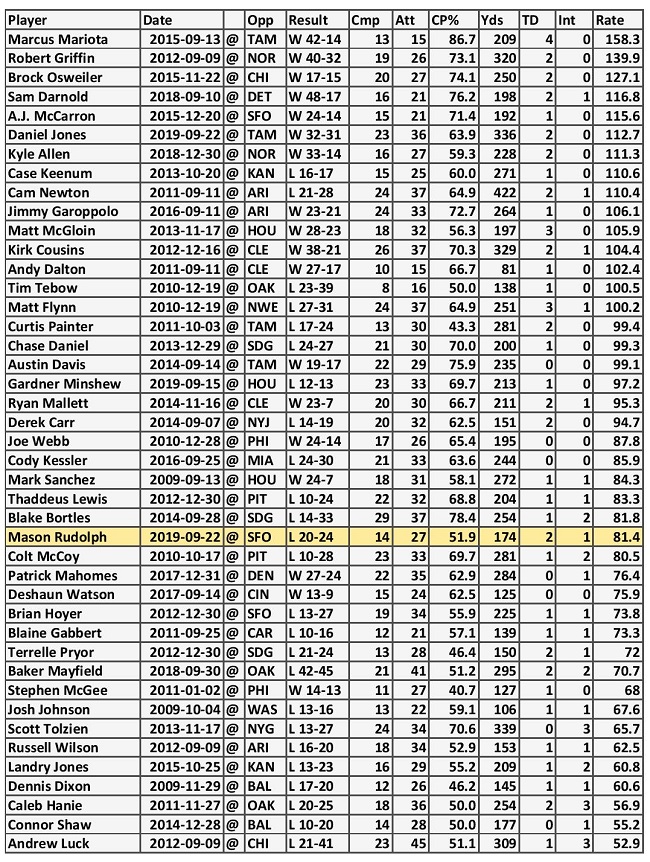 The quarterbacks listed above had a combined record of 18-37, which should come as no surprise. Winning on the road is tough for everyday quarterbacks, let alone a quarterback making his first career start. The listed quarterbacks also combined for 59 touchdowns and 67 interceptions, with a completion percentage of 59.7 percent and a quarterback rating of 75.9.

Rudolph’s passer rating against the 49ers was 81.4, which ranks 27th out of the 55 quarterbacks listed, meaning that he performed like the average quarterback making his first career start on the road. His completion percentage of 51.8-percent is also not too far from the 59.7-percent that the group tallied as a whole.

Look at the quarterbacks who rank at the top of the list. Marcus Mariota had a perfect passer rating in his first start but his career has been anything but perfect. Robert Griffin electrified in his debut and now he’s a backup for the Baltimore Ravens. Brock Osweiler looked like Peyton Manning’s heir in Denver and now he is unemployed.

Rudolph may not have performed to the sky-high expectations that some expected but when it comes to quarterbacks making their first career start on the road, his performance was about as realistic as they come.