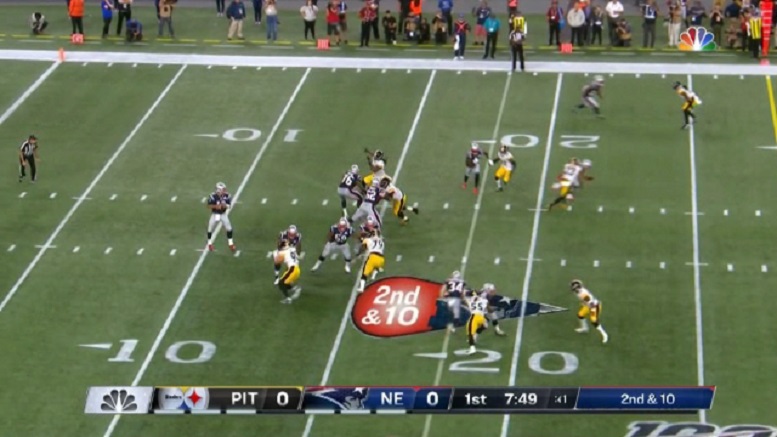 Pittsburgh Steelers rookie inside linebacker Devin Bush made his NFL debut Sunday night against the team’s regular season opening loss to the New England Patriots and as a while, the first-round draft pick out of Michigan seemingly represented himself well. On Thursday, Steelers defensive coordinator Keith Butler met the media for his weekly question and answer session and at one point during it he was asked to assess Bush’s play Sunday night.

“Well, he made one little minor mistake there,” Butler said. “He jumped down there and he tried to dadgum press the guy and he had a guy next to him that picked him. You know what I mean? And as a rookie, you learn stuff like that. He was trying to do the best he could because he wanted to cover the guy. And he felt like covering the guy, he’d get on and put his hands on and stuff like that. It just so happens another guy was right next to him at the same level and they picked him. You know, that’s probably the biggest play that he gave up the whole game.”

The play against the Patriots that Butler referenced Bush making the mistake happened in the first quarter with 7:50 remaining and on a 2nd and 10 from the New England 18-yard-line. As you can see in the gif of the play below, Bush went closer to the line of scrimmage to closely cover Patriots running back Rex Burkhead, who had reduced his split pre-snap. At the snap of the football, Burkhead got a free release on a quick underneath route and as Bush attempted to quickly run with him, New England tight end Ryan Izzo picked him off.

Was it a legal “rub off”? Well, it was withing a yard of the line of scrimmage, but regardless, had Bush stayed at his designed depth, maybe he would have tackled Burkhead for a short gain to set up a 3rd down. For whatever it’s worth, and it’s not much, Izzo was flagged for an illegal pick on the very next play.

If that one minor mistake was the worst of Bush’s play Sunday night, the Steelers might be in good shape. The rookie did record a team-high 11 tackles against the Patriots with three of those going down as stops. Bush played 76% of all defensive snaps Sunday night and his playing time is sure to stat increasing moving forward.

In case you’re curious, Pro Football Focus gave Bush a grade of 60.5 for his play Sunday night against the Patriots. If that winds up being his lowest graded game of his rookie season, the Steelers defense should benefit from it.