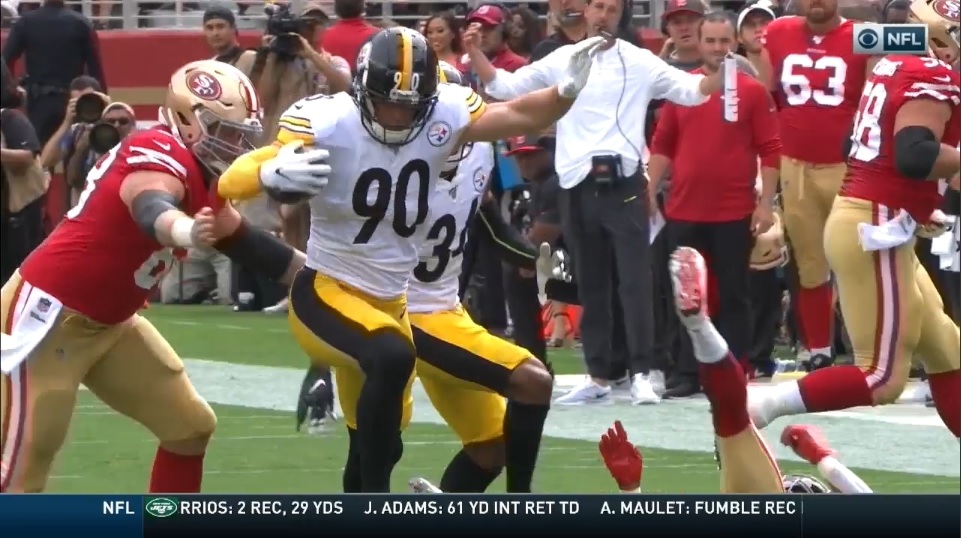 I talked about the topic so much during the offseason that it would only be fair to bring it up following Sunday’s five takeaway performance against the San Francisco 49ers.

Kudos to the Pittsburgh Steelers‘ defense in at least one respect. They’re taking the football away. A lot.

Make it seven takeaways through three games, all of which have come over the last two weeks. That’s tied second in the NFL, only trailing the Green Bay Packers, who have managed eight.

Put that number in context. That’s nearly half of what the defense did last season when they finished with a lowly 15 of them. Sure, some of them have been unforced errors. The 49ers botched one center/quarterback exchange and failed on another attempted fake jet play. The Steelers’ defense did nothing to impact the ball landing on the ground on either play.

But the good news is they’re opportunistic. Some of that is luck, I think we all understand that, but they’re simply plays this defense wasn’t forcing a year ago. There wasn’t an emphasis on ripping the ball out or chasing after it in practice. Now, you’re seeing it even as a matter or principle on plays where they’re unlikely to actually take the ball away. Tyson Alualu showed that on this third quarter run, flying in backside and trying to punch the ball out, even if it was to no avail.

The difference between a defense capable of creating turnovers and ones that aren’t often lie in the details and the effort. Good defenses create their own luck and bounces. So far, the Steelers have.

This defense has struck a delicate balance between having bonafide, dependable playmakers coupled with the whole team creating plays. TJ Watt is an elite player while Minkak Fitzpatrick looks the part of a splashy free safety. They can form the backbone of this unit. But Mike Hilton has forced a fumble, Devin Bush somehow fallen on seemingly every loose ball, Steven Nelson looks like someone capable of taking the ball away, while Stephon Tuitt is on to a career year and bound to strip the ball out sooner than later.

It doesn’t absolve the defense from their issues, we wrote about how their run defense has unusually struggled, but creating turnovers was the #1 mission for 2019. The magic number is 25 and so far, they’re well on their way, even if the offense’s woes mean a Super Bowl march isn’t going to happen. It’s still an encouraging sign for 2020.