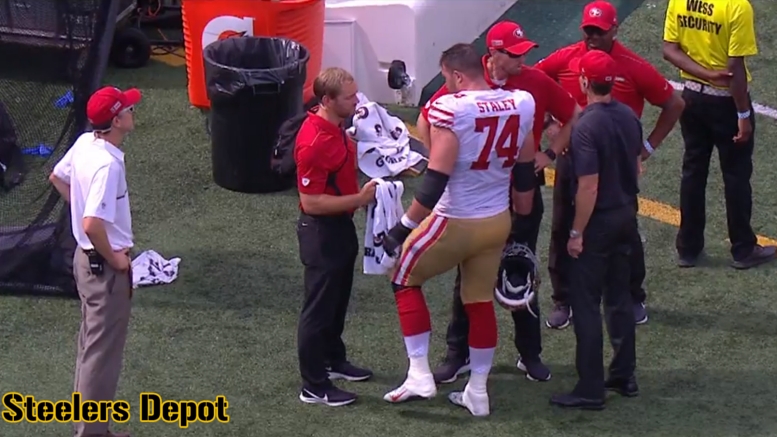 The Pittsburgh Steelers are uh, not doing so well to start the season. They have now fallen to 0-2 after consecutive losses to start the year courtesy of the New England Patriots and now the Seattle Seahawks. They are preparing to go on the road for the second time in three games already, but this time the trip is all the way to the west coast, where they will be hosted by the 1-1 San Francisco 49ers.

The 49ers had their way with the Cincinnati Bengals Sunday, defeating them in a blowout, 41-17, but it was costly. They lost their left tackle, Joe Staley, to a broken fibula, according to Adam Schefter, and is expected to miss eight weeks for the time being, potentially longer.

49ers’ OT Joe Staley broke his fibula and is expected to be out eight weeks.

Staley has been a lynchpin for the 49ers since being selected in the first round in 2007. The Steelers have only one player on their roster—quarterback Ben Roethlisberger—who has been in the league as long. Despite being 35 years of age, he has continued to play at a high level, a six-time Pro Bowler most recently in 2017.

While you would never wish injuries upon a player, the Steelers are not going to shed many tears for the 49ers right now, especially considering the hole they’re in and the possibility of their not having Ben Roethlisberger available to them after suffering some sort of right elbow injury that reports indicate may have been pre-existing.

In other words, they will take any help they can get at this point, and losing their left tackle is a significant blow to a 49ers team still trying to find itself with Jimmy Garoppolo under center. They traded for him two years ago, but he hasn’t been able to cement himself yet due to injuries.

Against the Bengals, he did complete 17 of 25 pass attempts for 297 yards, throwing for three touchdowns and an interception. On the other side of the ball, Andy Dalton again put up big passing numbers in a losing effort, 26 for 42 with 311 passing yards, two touchdown passes and an interception.

As of this writing, the Seahawks stand atop the division at 2-0, while the Los Angeles Rams hold a 6-3 lead over the New Orleans Saints at halftime. The Arizona Cardinals are 0-1-1, with the 49ers falling in the middle of the NFC West during the early goings.

Without Staley for potentially half the season or more, the road ahead doesn’t get any easier, and while the Steelers have been terrible record-wise on the west coast, they know that they need to get something in the win column next week.