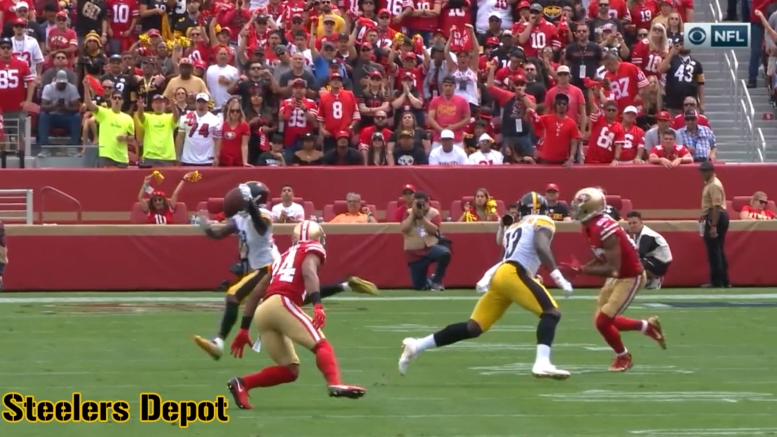 The Pittsburgh Steelers are still dropping passes three games into the season, but it is slowly getting cleaner. It’s not exactly a coincidence that it’s the one game in which Donte Moncrief was not targeted, either, since he accounted for four drops by himself over the course of the first two games.

In this latest one, we have three plays to look at, passes to Diontae Johnson, Xavier Grimble, and James Washington, respectively. Of the three, I don’t believe there can be much of any dispute about the latter two, but at least a discussion can be had as to whether Johnson’s play was a drop. But that’s not the end of the discussion for that play, either.

In the first quarter, with the Steelers still well into their own side of the ball, Mason Rudolph was facing a third and five when he looked to the rookie wide receiver breaking inside. One can argue that his only being able to get one outside hand on the pass means that he did not technically drop the ball. However, the fact that he slowed on the route before even getting to that spot means that he should have been in better position to make that catch in the first place. So even if it isn’t technically a drop, it was a negative play for Johnson. I do believe there is enough here to call it a straight drop, personally.

The next play we’re going to take a look at, seen above, is the drop by Grimble, who by this point was working as the number one tight end, with Vance McDonald having suffered a shoulder injury on a pass thrown over his head when a defender hit him while he was in a vulnerable position.

This one, on second and 10 early in the second quarter, simply went right through his hands. While he had a defender right there next to him, he didn’t really factor into the play. Grimble left his feet to go up and get the ball, which was a bit high, but it skipped off his hands, incomplete.

Then there was Washington, early in the second half. On first and 10, Rudolph looked to hit his college teammate. Again, this was a case of a pass being a bit high, but right off the receiver’s hands for an incompletion.

It’s one thing to have to execute the passing game—and the offense as a whole—without Ben Roethlisberger. To add the inability of your skill position players to make some relatively routine plays on top of that is doing the young Rudolph no favors.