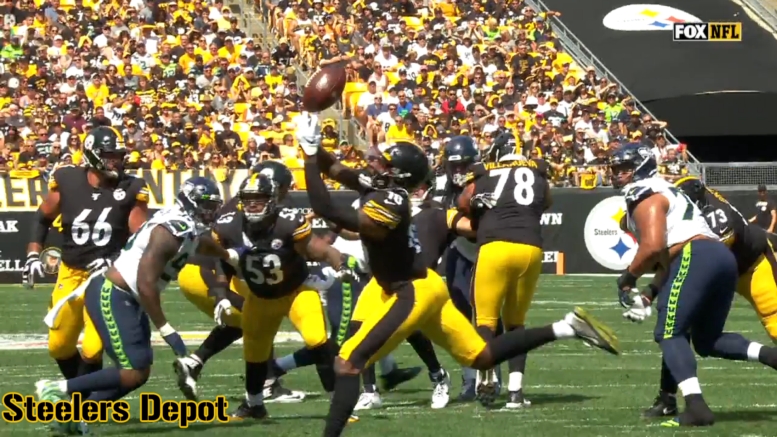 A week after the Pittsburgh Steelers dropped five passes in the season opener against the New England Patriots, the drop report is a little lighter this Saturday, though not as much as you would like. I’m going to look at four plays here, three of which I’ve marked as drops, though one comes with an asterisk.

The first here probably needs some context, too. That’s Johnny Holton there. He had one target in the game, and it was a long one. This ball was overthrown. While the slow-motion, zoomed-in replay shows that the football went through his hands—his wrists, even—it’s a stretch to call this a drop because of the degree of difficulty. Pro Football Focus marked it as a drop—but they also said Donte Moncrief had one drop in the opener.

On to the next play, we’re looking at the first play of the second quarter. Rookie Diontae Johnson was seeing some early action, and looking to make the most of it. He ran a crossing route and Ben Roethlisberger had him wide open.

While the ball is just a bit high and wide, you’re not going to get away with calling this anything but a drop at the NFL level. The Toledo product does have a history of concentration issue and drops in his background. Either he improves upon that as time goes on, or it’s just something that has to be accepted as part of his game.

Here’s the asterisk play, which requires some context. This was the second play of the third quarter, Mason Rudolph’s first-ever pass attempt. He was under pressure and looking to get the ball out. My sense is that James Conner understood that if he caught this ball he would lose yardage. I can’t say definitively if he decided to not make this catch, however, so since I can’t, it has to go down as a drop.

And then there was the big one. Moncrief, the star of the drop report. This was the very next play after the one above, coming on third and eight—which would have been about third and 11 had Conner made the previous catch—not that that would have mattered.

Rudolph saw his target flashing open ahead of his man in coverage down the field. The ball he delivered is on the high side, but extremely catchable for a tall target like him. It goes in and out of his hands, up in the air, and intercepted by the defense. Damn-near worst-case scenario.

He didn’t play another snap for the rest of the game. Again, third play of the second half. Fourth drop of the year, on 11 targets.