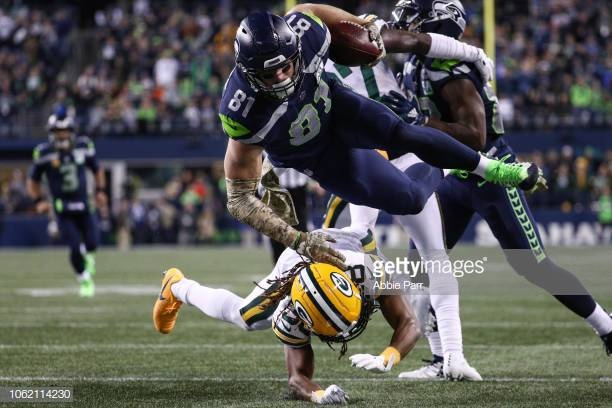 Question: Are the Steelers viewing Nick Vannett as more than a one-year rental?

Chances are that by now you’ve already been made aware of the fact that the Steelers made their second in-season trade for a player already, just three weeks into the season. After trading for starting safety Minkah Fitzpatrick a week ago following an injury to Sean Davis, they have now acquired tight end Nick Vannett after Vance McDonald suffered an injury in Sunday’s game.

Vannett isn’t being brought in to start, of course, but rather to bolster the depth at the position and tide it over until McDonald gets back, whether that’s one week or five. It goes without saying that he will be asked to play immediately.

Xavier Grimble has largely disappointed, particularly as a receiving target, so far this year in his first season functioning as the number two tight end. He also struggled as a blocker—albeit for some reason being asked to work against interior linemen—in the last game as well.

Vannett, a fourth-year veteran, former third-round draft pick, is a bit of a do-everything player who may contribute a lot right away while McDonald is out and transition into the number two role once he returns. It’s not as of yet known what this means for Zach Gentry since a roster spot will have to be cleared.

While Gentry won’t be the one to go immediately, given that McDonald is out, it’s possible that the Steelers waive the former once the latter is healthy in an effort to bring back whoever it is that they release today. My guess would be Fred Johnson, for now. There aren’t many desirable options. Even a Jayrone Elliott would be an issue since he’s not practice squad-eligible.

But, oh yeah, the point is that Vannett is in the final year of his rookie contract. They gave up a fifth-round pick to get him. That’s a steep price to pay for a one-year rental, so I would hope that they view him as a long-term option and somebody that they intend to re-sign in the offseason. Then again, they gave up a fifth for Brandon Boykin.