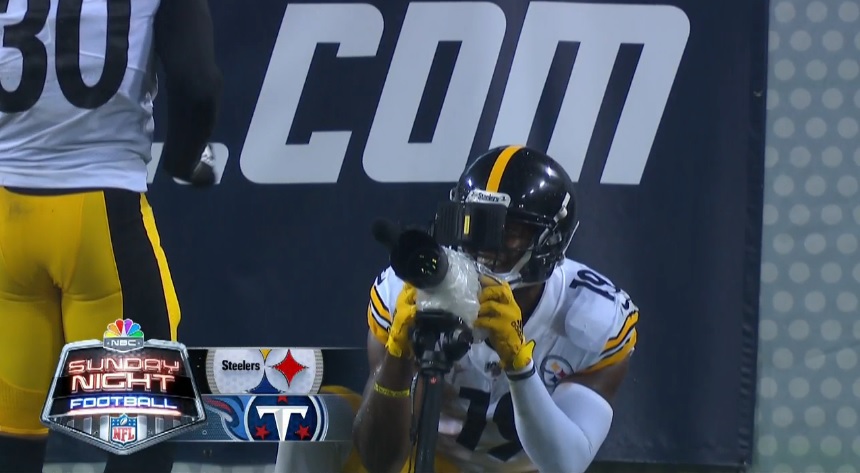 Highlights of big plays, important drives and stats of interest to encapsulate the end result of the game, the Pittsburgh Steelers beating the Tennessee Titans 18-6.

Steelers received the open kick to start the game. Steelers start with Ben Roethlisberger leading the number one offense. It started with a conversion to Donte Moncrief to move the chains.  However the next drive gained nothing on the first two downs and screen to James Connor on third down only got 8 yards.The defense started with an off sides by Terrell Edmunds to start the game giving them 5 yards and then illegal use of hands to the face on Stephon Tuitt to start the series. Incomplete passed on the next 2 downs followed by a draw sniffed out by Kameron Kelly led to a three and out

The teams traded empty series and then the defense made a big play. A big hit by Edmunds on the first play to break up a pass on first down. Big push by the defensive line on second down and Tuitt gets the sack for the safety. 2 nil Steelers.

After the free kick the series started at the 42. Connor got a nice 8 yard gain with Marquis Pouncey leading thru the hole. The next series was highlighted by short passes to Connor and Juju Smith-Shuster to move the chains. Passes were quick short routes. Trey Edmunds getting the carry on 3rd and 1 to move the chains next. Next play led to a one on one win on a post route to Smith-Shuster for a easy TD. They went for two and a dump to Jaylen Samuels and he slipped down. Steelers up 8.

Another defensive stop early lead to Mason Rudolph coming in fairly early.  Thought Ben might play some more. Nice agility by Samuels on a play that was supposed to go right, he broke out to the left for a 12 yard gain. Next play Rudolph deep to James Washington for 41 yard TD on a post route.  15 – 0 Steelers.

Second starts with a corner route to A.J. Brown over thrown followed by a read option the Steelers swallowed up.  Pressure lead to a pass to the TE just short of the first down line, covered by Sean Davis. Ryan Succop with a short field goal to put Tennessee on the board.  15 to 3 Steelers.

A couple series later started with a screen to Samuels that was incomplete, a run by Samuels for one yard then a miscommunication by QB and WR led to turnover. WR went inside; QB throws outside for an interception by Amani Hooker.

Defense still bringing it with a Vince Williams sack on first down for a loss of 8. Short pass underneath on pass to Anthony Firkser, nice coverage by Devin Bush and Edmunds to limit the gain. A completion on 3rd that included a fumble caused by Kelly but recovered by Tennessee. Then on the next series. After the 2 minute warning there were two short runs for not much yardage and on  third down Cam Heyward dipped under the left guard for an easy sack.

Update: Davis walking into the locker room and he didn’t look concerned.

To start the third the Titans converted 2 first downs before, guess who, Tuzar Skipper made a strip sack coming off the edge that was recovered by Pittsburgh.

Joshua Dobbs in to start the third quarter and a defensive penalty led to the first down conversion. Trey Edmunds had a couple carries with no blocking and the third down led to a deep shot caught by Johnny Holton that he got called for offensive pass interference. Not a good start for the Dobbs lead offense.

A big stop on third down by Marcus Allen on 3rd and short to not allow the conversion lead to the ball going back to the Steelers. Next came an end around by Diontae Spencer for a big gain on first down. He is exciting with the ball. Followed later by Dobbs avoiding lots of pressure, rolling out to his left to make a nice throw to Trey Griffey to the 15 yard line but the drive stalled and led to a Matthew Wright 31 yard field goal. Steelers up 18 -3.

Next drive starts with a hit by Justin Layne to break up a pass. Good to see the DB’s breaking up passes.  Big Dan McCullers got some pressure on the drive helping to slow the Titans progress heading into the fourth quarter where it stalled.

The first Steelers drive of the fourth started with a rollout pass to Zach Gentry that showed promise but two short runs by Malik Williams and had deflected pass halted that.

Titans got the ball moving on the next drive putting together a couple first downs. Sutton Smith got up field on one play to force it inside. The next play had a run the seemed to show a forced fumble by M. Allen but they let the play go. Zone coverage led to a big pass play to move the chains but after three short gains Tennessee settled for a 22 yard field goal. Steelers 18- Titans 6.

A scramble by Dobbs and a back shoulder drive to Brandon Reilly highlight the next drive getting them over midfield before Titans DT Frank Herron busts and facemasks Spencer on a reverse. That was followed by a rollout pass by Dobbs that was deflected and intercepted at the 3 yard line.

After a Tennessee drive that stalled the Steelers ran the ball and runout the clock to preserve win number three of the preseason.

Next up is the final preseason game on Thursday vs the Carolina Panthers. Kickoff is set for 7:00 PM.