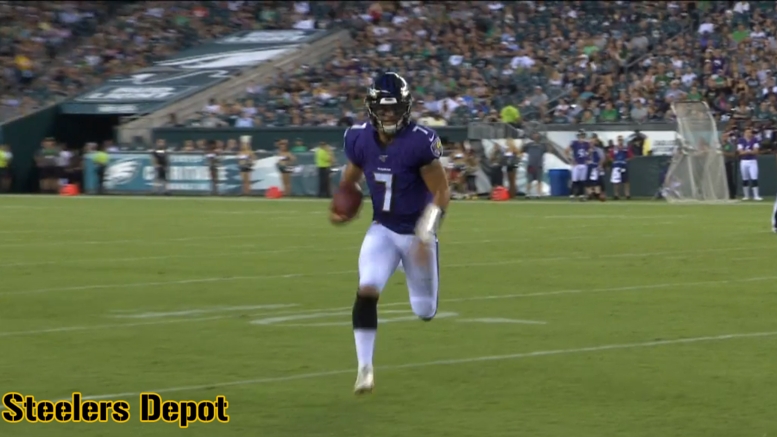 Earlier in the offseason, the Baltimore Ravens were talking about late-round quarterback selection Trace McSorley possibly working at other positions on offense as well. Maybe running down some punts. Even the possibility of playing on defense was broached.

The conversation started to change after Robert Griffin III suffered a finger injury that has left him sidelined for most of the summer. The Ravens did eventually being in Joe Callahan, but McSorley has been consistently running as their number two quarterback.

With three of their projected starting offensive linemen sitting last night’s game, head coach John Harbaugh made the decision not to play starter Lamar Jackson, giving McSorley the opportunity to start the game. He said that he only found out that decision in the morning—after he had missed a couple of calls that would have informed him of such.

That didn’t stop him from performing against the Philadelphia Eagles’ starting defense. He finished the game completing 19 of 28 passes for 203 yards with two touchdown passes with no interceptions, and he scored another touchdown with his legs.

“I thought he was very poised”, Harbaugh said of his rookie quarterback after the game. “Made a lot of plays on the move, extended some plays and made them, made some good throws. I thought the O-line did a good job protecting him, too. Yeah, he played really well”.

The Ravens are not among those teams who consistently keep three quarterbacks on their 53-man roster. In fact, in more recent years, they have been more likely to carry two rather than three, though they had three last year in Joe Flacco, Jackson, and Griffin.

“I think it’s been extremely beneficial” to get those second-team snaps and then playing in-game, McSorley said after the game. “Just getting in there and really seeing things live is a big difference than watching film or standing back and getting the mental reps. When you get in there and see it live, it’s different. And really having to deal with the ups and downs of games and things like that”.

What’s interesting is that the Ravens and Eagles held joint practices this week, and McSorley actually struggled, even ending the final practice with a couple of interceptions to close things out. He said that he “just wanted to bounce back from practice’, and it’s fair to say that he did that in last night’s blowout win.

Baltimore is, in fact, 16-0 now in their past 16 preseason games, which is worth—well, not much at all. However, the team has been quick to note that, over the past three years, they have gone 7-2 in their first three games of the regular season, implying that the preseason success translates into the early part of the schedule.

Of course, they’ve barely been to the playoffs since 2012, only twice, winning one game, so perhaps they should lose more preseason games and hope that has a bigger effect on the other 13 regular season games.