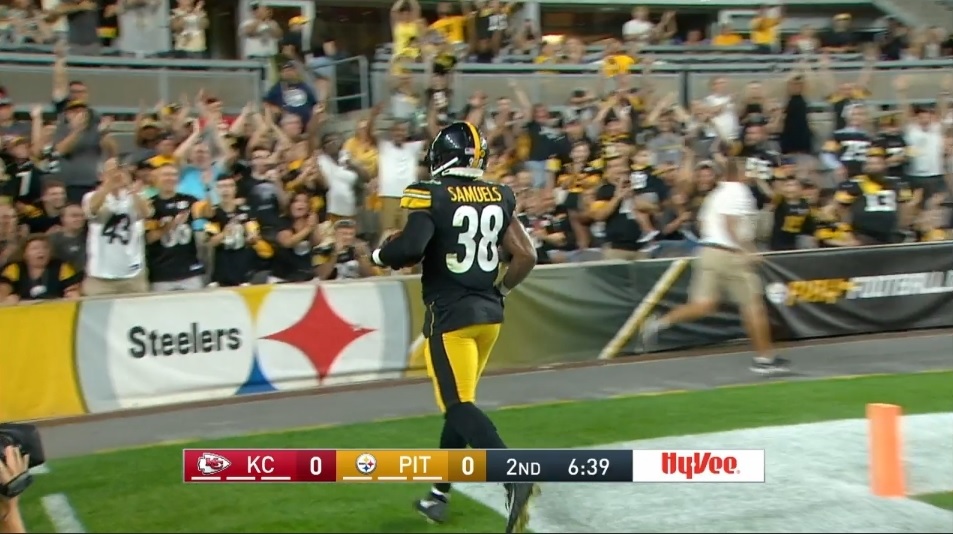 Following each game in the 2019-2020 Pittsburgh Steelers season I will be giving you my ten takes.  These aren’t going to be hot takes and meant to shock the world. This will be instant reactions to the game written while still in that period just following the game when the emotions are high and the ideas are fresh. Included will be thoughts, observations, queries and reasons that caused me to yell at the television.

1. Ugly first quarter – NFL players are creatures of habit on game day. They have their routine that they like to follow to prepare for the game. You throw in a lengthy rain delay and everything seemed ugly from the start. A three and out on the first drive. 3 fumbles (Vance McDonald, Donte Moncrief and Diontae Johnson), Chukwuma Okorafor got beat for an easy sack, multiple penalties, a drop by Xavier Grimble. It wasn’t pretty but I’m going to chalk it up to them being out of rhythm.

2. Good things coming from the starting OLB’s – TJ. Watt looked really good right from the get go. He had a nice bull rush vs Laurent Duvernay-Tardiff to get some pressure and then uses a rip on the outside shortly after. In the second quarter he knocked the ball out of the QB’s hand on a speed rush up the outside. Lots of good things. Perhaps a bit more surprising was Bud Dupree’s performance. He too was very active and he even looked a bit leaner. He got good penetration to the inside on a stunt, got his hand up on screen to knock down a pass and went around the edge for a sack. He did get sucked inside and lost contain on the edge a couple times. Being in a contract year isn’t always an indicator but sometimes players step up their game trying to get that next big contract.

3. Is Artie Burns’ confidence back? – As the Steeler Depot team has pointed out Burns performs well in the preseason. To me he looked to have some confidence back in his game. He looked to be in good position in coverage on the plays I noticed, made a tackle on Tyreek Hill early and recovered a fumble. He is another player on the last year of his contract. Could he step up his game as well? If he does, at some point, he could take that starting position back.

4. Can we bubble wrap Vance McDonald? – Another thing we’ve mentioned before is the depth of the tight end position. I wanted to give it a couple games to see what would happen with the players they have. If McDonald were to go down for an extended period I am not comfortable having someone takeover the starting position from what they have currently. Grimble doesn’t impress me. Zach Gentry has good potential but he is far from ready. I’m sure they’ll watch the waiver wire when the cuts start but they may need to trade for and experienced player who could take over if needed.

5. Trade from depth – If they are going to need to trade for a tight end or any other player they’ll have to do it from where they have depth. There are a few areas of depth where other teams may have interest. Quarterback has three backups that have looked pretty good so far. Offensive line has very good depth and is always a need around the league. Wide receiver is a solid group through receiver #6 but Diontae Spencer could push enough to make someone available.

6. The pass interference challenge rule – This was a knee jerk reaction to a ridiculously bad missed call in the playoffs last year and it already looks like a mistake much like the catch rule. We’ve seen how this has gone with all the other challengeable plays. It seems the final decision is wrong just as much as they get it right. I’m not a fan of challenges to begin with but this one is clearly going to be awful this season.

7. Special teams coverage – I like it a lot. On each kickoff and punt I am seeing a bunch of young, hungry football players racing down the field and making tackles. I could name the guys that have made plays but the list would be long. Maybe it’s the competition of these guys trying to make an impression that is bringing out the best of them. I hope the coverage teams can do this all year.

8. Jamming the tight end – Covering the tight end has been an issue for some time and it’s not a simple fix. They aren’t going to change one thing that will make it all better. But there was a glimmer of hope to help the coverage issue. Travis Kelce was in a 2 point stance in a tight slot and I believe it was Sean Davis who lined up across from him. Davis jammed him and didn’t let him off the line of scrimmage. I saw it at least one time later in the game with a different combination of players. More please, Keith Butler.

9. Number 2 running back – This is another scenario I don’t want to see but if James Connor were to miss time I’m not starting Jaylen Samuels. I like him as a player and I really like him as a receiver but if I need to give the ball to someone for 15-20 carries I want it to be Benny Snell. He’s the more natural runner and I trust him more to find the open gaps and create when needed. Samuels does a nice job of taking advantage of good blocking but doesn’t create as much when the holes aren’t there.

10. Kick returner – Is there a need any more to have a player on your roster designated the kick returner? In 2018, 18 of 32 teams had 60% or more of their kickoffs go for touchbacks. 27 of 32 teams had a least half (50%) of their kickoffs go for touchbacks. There were 17 players who averaged at least 1 return per game. Of those only 9 players averaged more than 25 yards per return. Stick a couple of shifty guys back there. If it goes in the end zone, take a knee. If it doesn’t get what you can vertically.