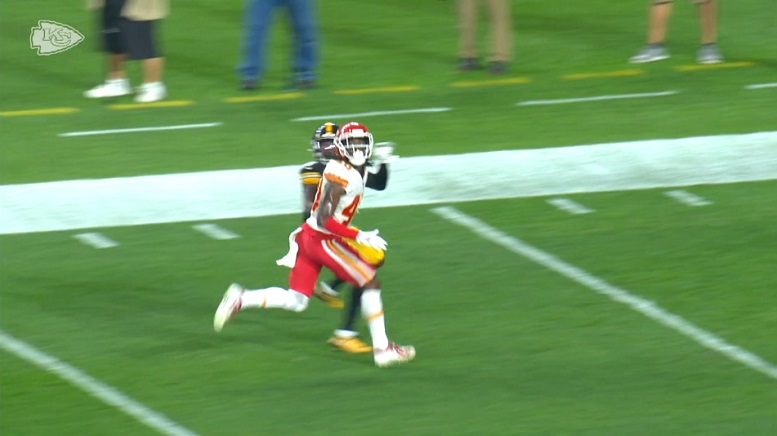 Pittsburgh Steelers rookie wide receiver Diontae Johnson had a fine NFL preseason debut Saturday night against the Kansas City Chiefs at Heinz Field as the team’s first of two third-round draft picks this year caught 3 passes for 46 yards and a touchdown. Johnson, however, probably should have had another reception for 24 yards and a touchdown Saturday night early in the fourth quarter. Head coach Mike Tomlin likely believes that to be the case as well.

With 14:23 remaining in the fourth quarter, the Steelers offense faced a 2nd and 10 from the Chiefs 24-yard-line, Johnson ran a deep fade route down the left sideline after an outside release and quarterback Joshua Dobbs delivered a nice back shoulder throw to the rookie out of Toledo after he had undergone a nice little hand fighting battle with Chiefs cornerback D’Montre Wade. After catching the football, Johnson managed to break the plane of the goal line for a touchdown. However, a flag had been thrown on the play and Johnson was called for offensive pass interference.

With the play being ruled a touchdown on the field, it was automatically reviewed by the officials. The play was allegedly looked at to see if the penalty on Johnson warranted being overturned as part of the new rule change this past offseason that allows them to do to so. The verdict was that the call on the field stood and thus the pass interference penalty on Johnson negated the touchdown. According to the radio broadcast of the game, Tomlin wasn’t happy with the verdict of the review and you can’t blame him when you watch the replay of what transpired.

Is there more to the play than what we can see via the television angles? It’s hard to know for sure and we likely never will thanks to no all-22 tape during the preseason.

After the game was over, Tomlin was asked during his press conference to give his thoughts on the offensive pass interference review.

“I’ll keep that to myself,” Tomlin said.

While Tomlin is a member of the NFL’s competition committee that put together the details of the new rule that now allows for pass interference penalties to be subject to video review, he didn’t sound like he would be in favor of a potential rule change happening at the end of the 2018 season. He did, however, acknowledge at that time that the competition committee would likely discuss a potential rule change again during the offseason.

“I have a firm position on that,” Tomlin said back in December. “I just worry about the entertainment component of it and what it might do for fans and the viewership and what it looks like. But given some of the things that have happened, I’m sure it will be up for debate as it always is and has been in recent years because technology and the amount of coverage that our game at this level gets – not only on Sundays, but seven days a week, which allows for that type of scrutiny and review.

“It’s just part of our business today. I think we all understand that. We’re all ready to have that debate every year. I don’t think we’re ever moving away from that debate – the utilization of technology and information in different components of the game whether it’s play, strategy, officiating or otherwise.”

We’ll see how this rule plays out moving forward but based on the few times we’ve see a few plays challenged, the verdicts certainly didn’t match what most non-biased fans expected. Even the television analysts who broadcast the Chiefs games thought that the Steelers were the victim of a poor review.

“When we looked at it from our replays, we didn’t think it was offensive pass interference,” Ari Wolfe of KCTV said Saturday night after the verdict of the play review was announced.

Wolfes broadcast partner, former NFL quarterback Trent Green, agreed that he thought there was no pass interference by Johnson during the play in question.