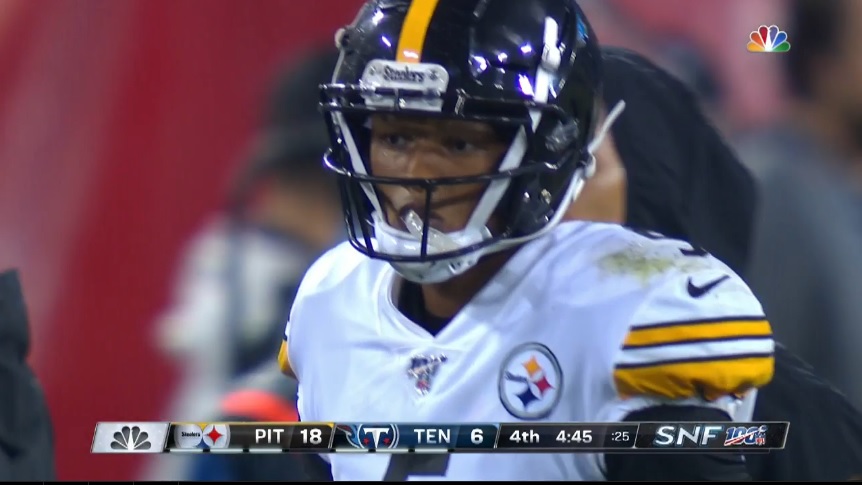 Mike Tomlin isn’t one to offer instant reactions right after a game, win or lose. He said as much in his brief post-game presser Sunday night.

“We don’t paint with a broad brush on game day, man,” he told reporters after the game via the team site. “We play on Game Day.”

But he had at least one concrete note on Josh Dobbs and his 4th quarter, red zone interception that ended a promising late-game drive.

“Dobbs gotta take better care of the ball, particularly in situations. We got the ball in the red zone, man, that’s points on the board. Gotta be a little bit more prudent there.”

Replay doesn’t offer a good angle but it appears to have been tipped and into the arms of Titans’ DB Mike Jordan. See for yourself.

Taking care of the ball is the #1 priority for all quarterbacks and red zone interceptions are especially killers.

To his credit, he made several great plays against the Titans. His escape-artist scramble to find Trey Griffey along the left side was a brilliant play and earlier in this series before the INT, hit Brandon Reilly on a backshoulder fade for a 30 yard gain. But as Matthew Marczi wrote, Dobbs’ inconsistency is the most maddening aspect of his game. Through three weeks, he’s yet to lead a touchdown drive for the offense, the only quarterback who has failed to do so.

This preseason, Dobbs is completing 53.6% of his passes (about the same he completed in training camp) with no touchdowns, a pair of picks, and two sacks.

Mason Rudolph’s continued strong play – he did throw an interception but that appeared to be miscommunication – has let him take another step in locking up that #2 job. The team won’t confirm it until after the preseason but the battle appears over. Dobbs is still the heavy favorite to be the #3 ahead of summer darling Devlin Hodges but plays like this are the reason why he won’t be the first man off the bench in 2019.