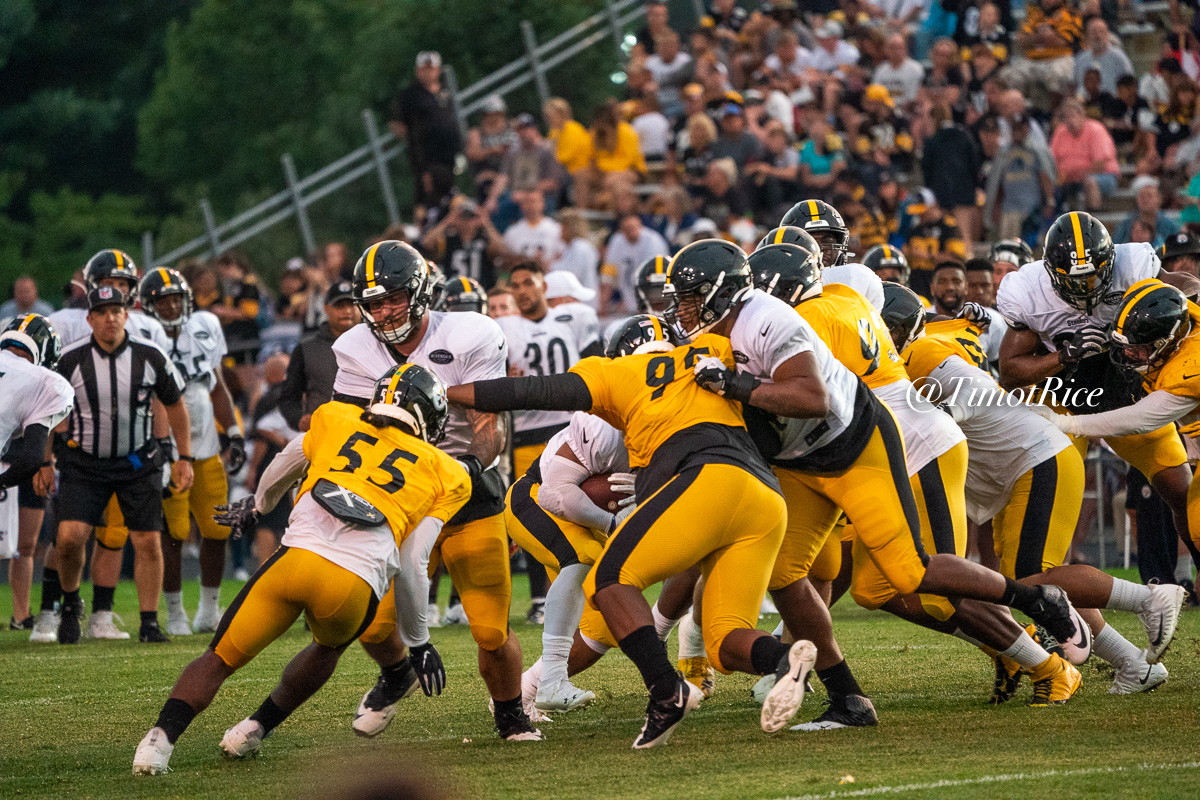 The Pittsburgh Steelers time in Latrobe as Saint Vincent College is, let’s admit it, one of the very most exciting times of the NFL calendar for fans. I would imagine that many find it more compelling and exciting than even the regular season, though I hope they would rather attend a Super Bowl than a training camp practice.

Nevertheless, the exodus from Latrobe marks an important shift in the calendar, and today is the Steelers’ final practice at Saint Vincent College, as they prepare to head back to the UPMC Rooney Sports Complex.

It was also the last day of pads, something of which Head Coach Mike Tomlin made sure to make his players abundantly aware. “We revealed that to them, and there’s a certain urgency with that”, he told reporters yesterday following practice.

“Certain things that we do here, the nature in which we work, carrying the pads, the drills that we do, it’s just a ‘capture’ moment”, he went on. “I thought the guys displayed that understanding today with the energy they brought to the drill work”.

As you probably know, teams are only permitted to work in full pads a certain number of times over the course of a training camp schedule, though they are not required to use the total number of days, and teams often do not.

That tends not to be the case for Tomlin’s Steelers, who retain among the very most physical practices in all of the NFL, something that ESPN’s Dan Graziano recently realized when he paid a visit to Latrobe last week.

“This is the only camp I’ve been to in which players have been allowed to hit and tackle each other to the ground this much”, Graziano wrote about his trip to Saint Vincent College on the 7th earlier this month. “It’s jarring to see it. Kind of like walking into a restaurant where they allow smoking these days; you’re a little bit shocked that there are still places where this goes on”.

In case any of you out there were still wondering if the Steelers’ training camp really is something different. He attended practices at about a quarter of teams’ camps this year, and Pittsburgh’s stood out in a very big way.

Truth be told, it took years to earnestly pay off. One of the reasons that Tomlin started returning the team to full-tackling drills was because, as Graziano wrote, he “believes in practicing the way you play”. His defense had developed a lot of issues in the tackling department. While they still have some trouble spots, last year, they emerged as one of the cleanest-tackling units in the NFL.

That needs to continue, and is the bedrock shaped in these training camp practices. The players step up to the occasion when put in these full-contact drills, understanding the enormity of the occasion. That doesn’t happen during the regular season, of course, and certain players may be held out of the full-contact work, but it’s become an integral part of Tomlin’s approach to preparing his team for regular season play—even if it was once the norm around the entire NFL and is now an anachronism.