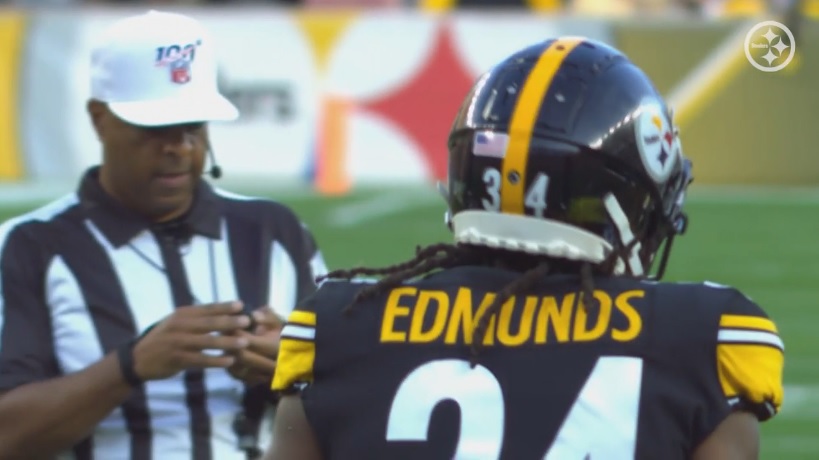 As a rookie, Terrell Edmunds was supposed to be a backup. A rotational piece, coming in when the Pittsburgh Steelers used their dime package, playing in obvious pass situations where he could patrol the deep half and slowly get accustomed to the NFL.

Instead, he played nearly 1200 snaps, the second most of any rookie and 11th most of anyone in the league last year. While he had his struggles, especially early in the year, all those snaps he wasn’t supposed to play are paying off now.

“The reps, the ups and downs of last year really helped me out,” he told Steelers.com’s Missi Matthews during Friday’s game. “Now it’s time to build off of that last season.”

His progress is as clear as day. Edmunds has enjoyed a strong camp, playing faster and keying the ball quicker. He can now play to the athleticism that got him drafted. The 4.47 40 time, 41.5 inch vert, 11’2″ broad jump. None of that matters if you’re having to think about the play unfolding before you.

“Just learning the playbook better,” he said. “Going out there and getting more comfortable with my teammates. Trying to have less mental errors. Just going out there and playing football instead of reacting.”

Edmunds had an impressive breakup in limited action Sunday, knocking the ball away from Buccaneers’ receiver Justin Watson in the end zone.

Edmunds did well to try and play up through the pocket and separate the hands of the receiver. That, actually, appeared to fail so at the last second he came back down through the hands and poked the ball out. Regardless, a high-level play in coverage he probably wouldn’t have made this time a year ago.

With Sean Davis able to settle into his second year at free safety and Edmunds his second year in the league, the goal is to produce a lot more splash plays than the duo did a year ago. Despite starting 31 combined games, they had just two turnovers, an interception by each player.