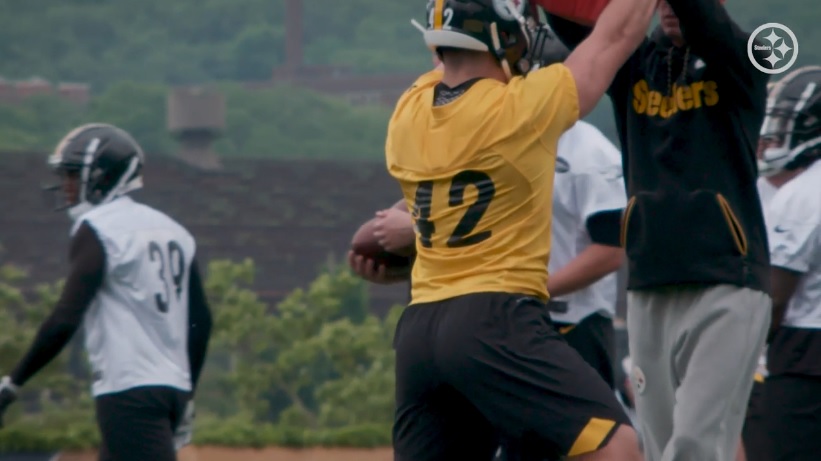 Anybody looking forward to seeing Pittsburgh Steelers rookie outside linebacker Sutton Smith play tonight had better stop holding their breath, because it might be a while before you can breath again. The sixth-round pick was sat out of the team’s first preseason game with an abdominal injury.

He told Brian Batko of the Pittsburgh Post-Gazette that he will also be held out of the second preseason game, later tonight. Considering the fact that Olasunkanmi Adeniyi just had surgery and the team waived J.T. Jones, the line at outside linebacker is getting short.

That leaves only starters Bud Dupree and T.J. Watt in addition to Anthony Chickillo and Tuzar Skipper as the healthy options, provided that the information that Smith gave Batko about his not play remains accurate. But Adeniyi is obviously not going to play on a freshly-operated-on meniscus, and if Jones gets on the field tonight, it would be as a trespasser.

As an aside, that leaves one to wonder if rookie inside linebacker Ulysees Gilbert III may see any time on the outside. He did record three of his 12 pass-rushing snaps last week coming off of the edge rather than up the middle, though that is not outside of the norm for the interior players to play off the edge. It is something that they did with Matthew Thomas in the preseason in 2018 to expand his versatility and make it easier to justify keeping him.

Back from the derailment and on to Smith, however, things have not been going particularly well for him, even though he was able to return to practice late this week after missing a couple of weeks due to the aforementioned abdominal injury.

“There’s a lot of stuff I really can’t do right now”, he told Batko. “You just don’t want the risk of re-injuring it, really”. But he added that he’s doing everything else that he is able to do, including studying his playbook and film. “Just trying to stay tuned-in mentally”, he added. “That’s really the big thing”.

I’m not quite sure I could agree for a player in his circumstances, because quite frankly he needs to get on the field and produce some tackles if he wants to make the roster. He did say that he felt he would return for the final two preseason games, but “it’s all up to their discretion”.

As you likely are aware by now, preseason injury ‘reports’, such that they are reports, are notoriously oblique, since coaches have no obligation to specify at this time of the year. That changes in the regular season, of course.

“I have no idea what their plan is, and I’m just following it, really”, the rookie said. One can’t help but wonder about the actual extent of the injury. If he feels he can return by next week, that obviously suggests that he is not a candidate for the Reserve/Injured List