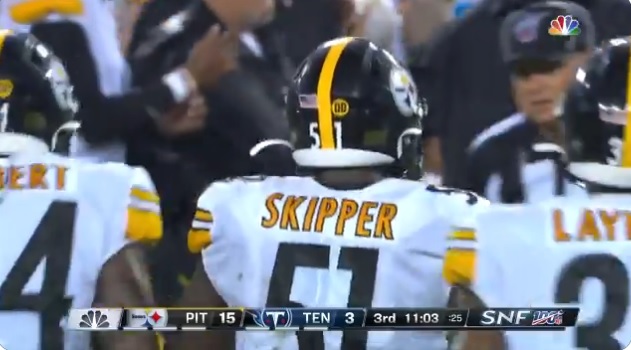 Winners and losers from the Pittsburgh Steelers 18-6 win over the Tennessee Titans Sunday night.

Mason Rudolph/James Washington: The OSU connection still runs strong. The two hooked up on a 41 yard touchdown on a post route in the middle of the field. Good throw, great track and snag by Washington, who has made big play after big play this month. Miscommunication, it appeared Washington ran the wrong route, resulted in an interception later in the game, but both players keep turning in big performances when they get into stadiums. Doing it on the road for the first time all year and in the rain was another challenge they overcame.

Starting Defensive Line: The trio of Cam Heyward, Stephon Tuitt, and Javon Hargrave absolutely wrecked the Titans’ front five. Tuitt finished with a pair of sacks, Heyward with one as the first team defense got to Tennessee time and time again in the first half. You knew all three guys were studs but they proved it again tonight.

Maurkice Pouncey: Nice night for most of the offensive line but Pouncey’s mobility was especially on display, pulling and climbing to the second level to create big lanes in the run game. Glad whatever minor camp injury he dealt with is in the rear view mirror. Still don’t understand how Pouncey doesn’t get the credit nationally as he should.

Bud Dupree: Dupree showing some power? Is this real life? Now healthy, he’s able to push the pocket and though he didn’t officially show up on the box score, generated some pressure that helped guys like Tuitt get home. Nice preseason for him and a ray of hope that 2019 – finally – will be that breakout year. Still has to do it, of course.

Kam Kelly: Even assuming Sean Davis escaped serious injury, Kelly is going to have a role in this defense. His versatility gives him options at slot corner or free safety. He can run and hit, forcing a fumble, and will provide depth at a position that looked thin entering camp while carving out a role defensively. Another good showing from him.

James Conner: An obvious choice but props to him for running hard. Averaged 8.2 yards per carry, highlighted by juking Adoree Jackson en route to a 21 yard gain while catching two passes for another 15 yards. More importantly, he dominated the snap count with the first team offense and will very much be “the guy” this season.

Tuzar Skipper: Skipper keeps making plays. Another strip sack/fumble tonight and he held the point of attack in the run game. Making the best push possible for a spot on the 53 man roster though the numbers game is a hard nut to crack. But he’s done about all he can do. Lack of special teams value is the area really dinging him.

Dan McCullers: Dare I say, Big Dan was everywhere tonight. Multiple run stops, finishing with four tackles, and at least one pressure as a pass rusher on QB Logan Woodside. At this point, it’s impossible to ignore the improvement he’s shown especially with his down-to-down consistency.

Johnny Holton: Not a lot of losers tonight on a day where the Steelers controlled this one from start to finish. But Holton struggled. Didn’t get the nod as first team gunner, that went to Artie Burns and Justin Layne, and couldn’t stay inbounds on either of his deep downfield targets. Have to know where the sideline is. Still haven’t seen him do enough to crack the 53.

Artie Burns: Not a terrible performance by any means but struggled to stick at the catch point. Didn’t get fooled by a Corey Davis double-move early in the game, which was good, but bumped off the route as Davis stemmed vertical and gave up space at the top. It’s still been a good camp/preseason for him though.

Vance McDonald: Minor point, again not a lot of losers, but ugly drop on the first series. Took his eyes off the ball after finding the soft spot against the Titans’ zone defense. He’ll be fine and a big part of the offense but it was an ugly moment.