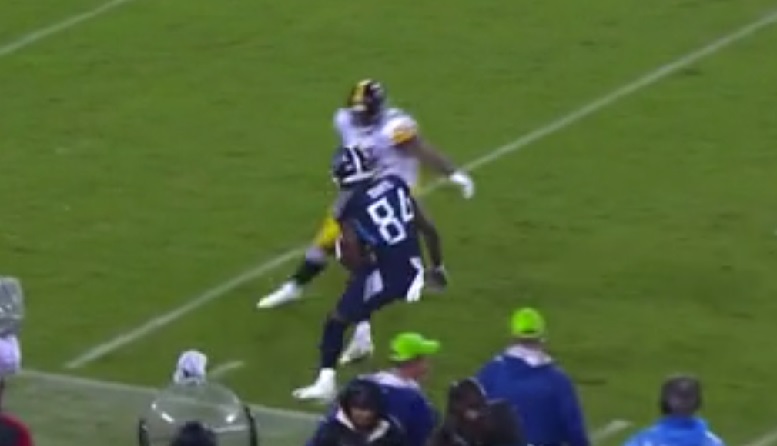 As the preseason draws to a close, the Pittsburgh Steelers continue to get better and better in the tackling department.

On Sunday night in Nashville, the Steelers turned in a very clean performance in the tackling department, recording just 3 total misses, which is very impressive, considering the wet, sloppy conditions they played in at Nissan Stadium against the Tennessee Titans.

Once again, none of the missed tackles in the game led to major splash plays for the opponent, which is a great sign for the Steelers defense overall.

This group continues to get better and better, even without serious tackling practice, which blows me away. Now that there’s speed and physicality on that side of the football, things are really looking up for the defensive unit.

On Vince Williams’ missed tackle against the Titans, it looked like one of the typical ones from recent years where a defender tries to get back in phase and overruns the football.

I wish we had a better camera angle to see how Corey Davis worked his way so wide open, but alas, that’s preseason for you. Williams is in recovery mode here to try and track down the explosive receiver, and he does a nice job working back to cut off Davis. However, he gets a bit too far upfield, allowing Davis to slam on the breaks and cut underneath Williams, leaving the veteran linebacker flailing at air.

Fortunately for Williams, Terrell Edmunds tracks back to get Davis to the ground before a big play can develop.

Later in the first half, Artie Burns put his name into the mix in the missed tackles department, failing to get AJ Brown on the ground in open space.

On third and long, Ryan Tannehill throws a simple hitch route to Brown short of the sticks. The idea was to get Brown 1-on-1 in space against Burns to try and make something happen after the catch.

Thanks to Burns’ gaffe in the tackling department, Brown nearly converted. However, Kameron Kelly saved the day by punching the football out of Brown’s arm, causing the rookie receiver to scramble to recover, rather than try and convert the third down.

Burns is in good position to make the stop, but he just doesn’t have the play strength to complete this tackle. That’s been a concern with him, and it reared its ugly head again on Sunday.

Isaiah Buggs’ missed tackle came on Akeem Hunt late in the game on a play in which Buggs was working right to left down the line of scrimmage, arrived slightly late and went for an arm tackle, allowing Hunt to slip through.

Offensively, the Steelers dominated in the forced missed tackles department, racking up 12 forced misses. That means they won the battle with a +9 advantage.

In his first real extended action of the preseason, James Conner appears ready for a monster season in Year 2 as a starter.

Conner was one of the best backs in football last year in creating missed tackles, and he did that again on Sunday, forcing three misses against the Titans, none better than this one.

This is a great job by the Steelers here, getting Ramon Foster to work across the formation while the right side of the line walls off the Titans’ defensive front. From there, the Steelers let Conner work 1-on-1 in space against a defensive back, and well, Conner wins easily.

This is what he does, folks. Conner might not look like it on paper, but he’s an elusive back that finds a way to forced missed tackles consistently.