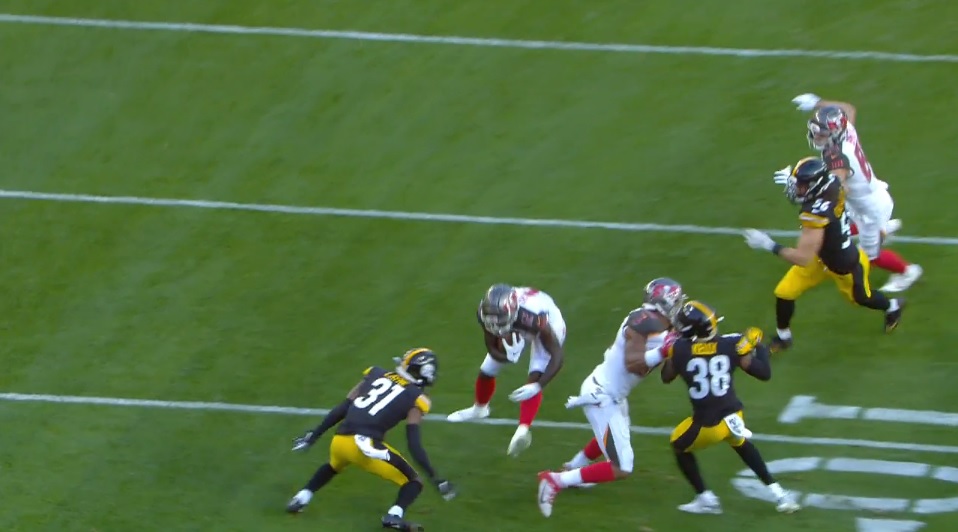 With the first preseason game each and every year, one can expect plenty of sloppiness on both sides of the ball.

Last Friday against the Tampa Bay Buccaneers, that’s just what we saw throughout the game at Heinz Field from the Pittsburgh Steelers, especially on defense.

Tackling and assignment sound football are usually the biggest suspects in settings like that, and that’s what we were treated to, especially early on with tackling. In fact, Pittsburgh missed five tackles on Tampa Bay’s opening drive, which resulted in a touchdown.

Fortunately for the Steelers, they cleaned it up in that department after that, finishing with just 9 misses overall, struggled with assignments and coverage details instead.

Let’s take a look at the overall missed tackles numbers from preseason week 1.

Right away, seeing Layne’s name atop this list is a slight concern. However, one should have expected that since he had such a rough showing overall in his NFL debut.

Tampa Bay did a great job of going after him early and often, and as Mike Tomlin told Layne before the game about learning today, Layne certainly did.

When not playing off coverage allowing easy completions for Jameis Winston, Layne really struggled early with tackling. I’m going to chalk a lot of that up to nerves and thinking too much, rather than just playing.

Here on Chris Godwin’s touchdown catch-and-run on a short screen, Layne is the last defender with a chance to stop the former Penn State product.

Layne flat-out whiffed on the tackle.

He puts his head down, fails to see his target clearly, goes for an arm tackle and a few seconds later Godwin is celebrating in the end zone.

Keep in mind, this is Layne’s first real NFL experience; so don’t go writing off the third-round pick just yet. Late in the first half he started to improve in his coverage techniques and got guys onto the ground quickly after the catch. He also missed a tackle in similar fashion on short touchdown run by Dare Ogunbowale. Layne expected a cut to the outside and shifted his weight towards the boundary. Ogunbowale stayed inside and forced Layne to lung with right arm and miss.

On the same opening drive, Ola Adeniyi recorded his first missed tackle of the preseason, with the miss coming on a possible sack of Winston.

Adeniyi flew in off the edge, beating left tackle Donovan Smith with a wipe and rip underneath for a clear path to a deep-dropping Winston. However, Adeniyi fails to stay deep enough in his rush arc, giving Winston a small path of escape. It does look like Smith has Adeniyi held around the left arm, which may have helped Winston slip free.  That said, it was a big miss that extended Tampa’s drive as Winston scrambled for 10 yards and a first down on the play.

Offensively, the Steelers had a strong day in the forced misses department, matching the defense with 9 forced misses, breaking even in the first preseason game at Heinz Field.

The obvious one that stands out there is Josh Dobbs and his team-high 3 forced misses. Just one of them came on his 36-yard run deep into Tampa Bay territory though, as the other two came with him avoiding sacks in the pocket.

Diontae Spencer forced both misses on his first punt return, shaking two defenders in a phone booth before getting upfield for a short gain, while Jaylen Samuels forced his lone miss on a short crossing route connection with Dobbs, in which he ran through an initial arm tackle.

The highlight of the night though was Johnny Holton’s 60-yard catch-and-run.

Mesh here for the Steelers, as Holton runs right to left for a wide-open connection that has Holton at top speed in the open field.

From there, the former Raiders wide receiver shows off his open-field abilities, spinning out of one tackle and forcing another defender to miss in the process, before turning on the jet to run back across the field for the splash play.

If he can continue to flash some receiving abilities to go along with his special teams play, Holton is making this roster.

Then, we have Benny Snell. The fourth-round pick didn’t have a great night in terms of raw numbers, but that was largely due to a poor offensive line performance in front of him. That said, he showed some shake and bake at times.

This is a really simple power to the right with JC Hassenauer pulling from left guard to kick out the front side defender. Hassenauer is a bit slow to get out there all the way, but Snell helps him out by setting up the Bucs defender with a jab step to the outside, forcing the defender to bite before then bursting back inside. I love the footwork and the explosion shown here.