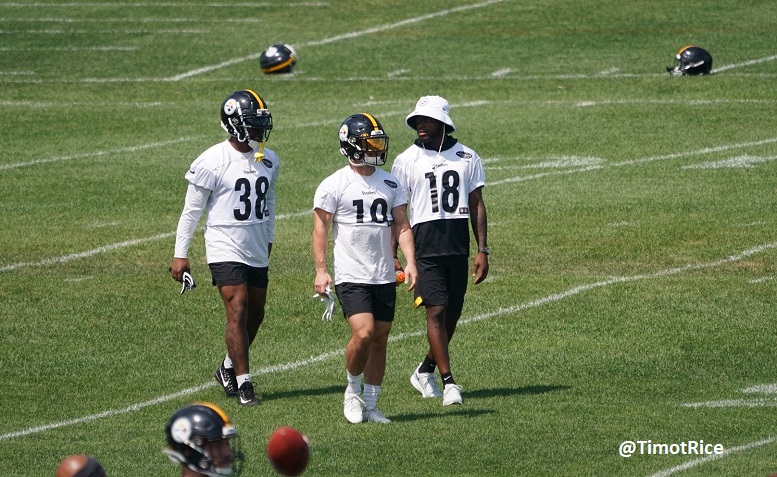 The Pittsburgh Steelers had a little bit of a lighter practice on Saturday at Saint Vincent College in Latrobe as the team was out of pads after practicing in them Friday night under the lights at Latrobe Memorial Stadium. After Saturday’s practice was over with, Steelers head coach Mike Tomlin gave a little bit of an update on the three players who were injured late in the team’s Friday night practice, wide receiver Diontae Johnson (hip), inside linebacker Vince Williams (hamstring) and outside linebacker Anthony Chickillo (hamstring).

“Nothing of any significance,” Tomlin said when asked about the three players injured late during the team’s Friday night practice. “Hopefully they’ll be working their way back to us. I think all of it can be described as a day to day like variety.”

Roethlisberger also didn’t practice Friday night but Tomlin said he’s not dealing with any kind of an injury when asked about the starting quarterback on Saturday.

“No, we’re just creating more opportunities for guys like Mason [Rudolph] and Josh [Dobbs], particularly with that two minute drill we did today,” Tomlin said. “We’ve seen Ben in enough two minutes and he’s going to have an opportunity. But particularly as we push into preseason football, the guys that could be in position to execute two minutes in week-one or the preseason or week-two of the preseason are the guys that need the reps. So we just wanted to show homage to that.”

Wide receiver Johnny Holton (hamstring) is reportedly back practicing again. He missed quite a few recent practices with a hamstring injury. Also reportedly back working on Saturday were outside linebackers Bud Dupree (undisclosed) and Sutton Smith (undisclosed) after both were reportedly held out of the team’s Friday night practice for unknown reasons. Long snapper Kameron Canaday (groin) also seemingly worked in some capacity on Saturday after sitting out Friday night and missing most of Thursday’s practice.