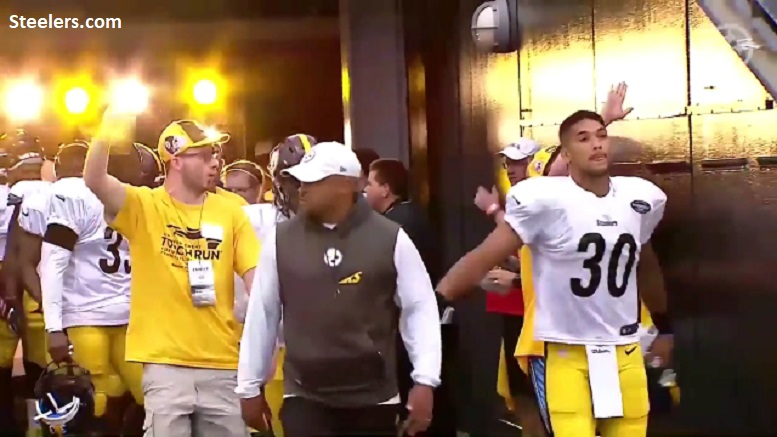 In the social media world that we now live in it’s easy to spot the presence of nearly every current NFL player on either Twitter, Instagram or Facebook, and sometimes all three. However, we are also starting to see more and more NFL coaches increasing their own presences on social media. New Pittsburgh Steelers running backs coach Eddie Faulkner is one of those NFL coaches not afraid to post on his social media accounts from time to time. In fact, Faulkner not only posted Monday morning on his social media accounts, he also made a bold 2019 prediction for a player that he coaches.

Just a kid from @cityofmuncie who has been #blessed beyond belief! @jamesconner bout to go crazy this year! 🦍 Just wait! ⏳

While the Steelers might mix in some of Jaylen Samuels and rookie Benny Snell Jr. throughout the 2019 season, there’s no reason to think that the team will use a full-blown backfield-by-committee approach that several analysts have been attempting to sell most of the spring and summer. In short, expect James Conner to be the Steelers bell cow running back once again in 2019 and hopefully that includes him not having to miss any games due to injuries.

Last season, Conner was responsible for roughly 75 percent of all the Steelers run attempts up until he got injured in Week 13. He had also played roughly 80% of all offensive snaps before suffering an ankle injury that ultimately forced him to miss the next three games. Then-rookie Samuels proceeded to play well in Conner’s absence even though his running style is a bit different and includes more patience.

While Conner might have a slight decrease in his overall offensive playing time percentages in 2019, he still should see the field plenty and potentially enough to produce more than the 1,470 total yards from scrimmage that he produced in 2018. He totaled 270 touches last season and that was even with him missing three-and-a-half games due to injury. Will he hit 300-325 total touches in 2019? That might be too high of expectations but averaging 20 a game certainly isn’t unthinkable, just the same..

“It’s a long season,” Faulkner said back in June, according to Mike Persak of the Pittsburgh Post-Gazette. “You’ve [have to] be cognizant for sure. And at the same time, keep him sharp and playing at a high level throughout. So that is a challenge, especially with a guy like James who’s ready to go out there and he’ll play every stinking play of the season if he could.”

So, should you believe Faulkner’s prediction that Conner will go crazy this year? Yes, I think you should. I mean, why wouldn’t you?