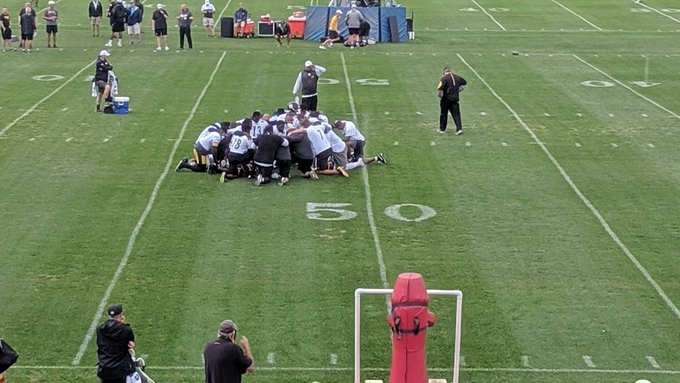 There’s no question how hard of a situation the Pittsburgh Steelers are in right now. The regular season is just weeks away, the focus supposed to be on getting ready for the new year, but for obvious reasons, the focus is anywhere but. The team is still grieving after Darryl Drake’s death and that won’t change anytime soon. But if there is a silver lining to this awful situation is the opportunity for the team to come together. Based on their interactions during Tuesday’s practice and the things posted to social media, that seems to be happening.

I’m with you Brother… We got this TOGETHER… love BROTHER..

His caption reads: “I’m with you Brother… We Got this TOGETHER… love BROTHER..”

The photo is Moncrief helping Smith-Schuster up. Early in yesterday’s practice, Smith-Schuster laid on his back in the end zone for several minutes. Moncrief came over, briefly stretched and then helped JuJu up to walk to their drills. Despite being new to the team, signed this offseason, Moncrief has already been praised for his professionalism and in these moments, is clearly counted on for his leadership.

Conditioning assistant Marcel Pastoor posted this photo of the offense’s huddle/prayer before breaking off into one-on-one drills Tuesday.

The caption reads: “Brothers till the end. Steelers football IS family. This ones for you Drake.”

Emotions are running high and plenty of time will have to go by to heal this wound but the Steelers have the leadership to get through this trying time as well as anyone. There’s leaders at the top. Mike Tomlin’s always had the pulse of the locker room. There’s leaders in the men tasked to try and replace Drake like Ray Sherman, a long-time coach and similar father figure for the receivers. There’s strong leadership among the players. Bringing in Moncrief, Ben Roethlisberger, and Ramon Foster/Maurkice Pouncey along the offensive line while the defense can boast a similar story with guys like Cam Heyward, Vince Williams, and Joe Haden.

Traveling to St. Vincent College is designed for the team to come closer together. Leaving camp, their bond may never be tighter.