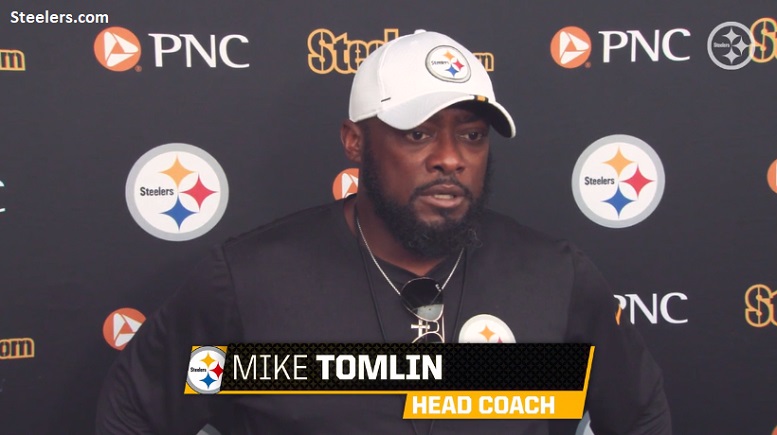 The Pittsburgh Steelers practiced in pads again on Thursday ahead of their third preseason game of 2019 that will take place Sunday night against the Tennessee Titans and after the session ended, head coach Mike Tomlin addressed the media.

“Another good day today,” Tomlin said. “Simulated an in-season Thursday, just taking a step in in the process of preparation, focusing on elements of special teams play from a classroom setting, but did I normal procedures and things out here. Just familiarizing the young guys, the new guys with our approach to business so they can find their footing and put their best foot forward and have a consistent level of play. That’s what we strive for. So, we’ll continue to push through the week. Good day today.”

Tomlin wouldn’t not reveal on Thursday which players may or may not play in the team’s preseason game Sunday night against the Titans. Additionally, he wouldn’t name the players currently not practicing.

“Again, no real plans in terms of who’s playing and how long they’re playing,” Tomlin said. “Obviously it being the third game the first units are going to play and play significantly more than they have. Those that are dealing with day-to-day like injuries, we’re not gonna eliminate anyone at this juncture. We’re gonna leave the light on for them and have an inclusive mentality because the opportunities to state a case for themselves are getting fewer. So, that’s our mentality”

According to Brian Batko of the Pittsburgh Post-Gazette, rookie wide receiver Diontae Johnson said Thursday that he’s dealing with “just a day-to-day thing” which is why he didn’t practice earlier in the day.

“I’ll do what I can, and if I can play, I can play. We’ll see,” Johnson reportedly said.

We’ll have to wait and see if Johnson is ultimately able to play Sunday night against the Titans. The team’s first of two third-round draft picks this year had a nice preseason debut last Saturday night after missing the team’s first preseason game with a groin injury.

One payer who will indeed sit out Sunday night is cornerback Joe Haden, who is still recovering from an ankle/foot injury he suffered late in training camp and just prior to the team’s first preseason game. Haden talked about how he’s currently feeling on Thursday.

Steelers outside linebacker Olasunkanmi Adeniyi (meniscus) won’t play Sunday night and it will be interesting to see if fellow outside linebacker Anthony Chickillo (chest) is also forced to miss that contest as well. It’s unclear if Chickillo has been able to practice any since suffering a chest injury in the team’s second preseason game. On Thursday the Steelers signed another outside linebacker to their roster in the form of free agent Jayrone Elliott.

Practicing again on Thursday was tight end Vance McDonald so we can probably expect him to play Sunday night against the Titans along with the rest of the Steelers first-team offense.