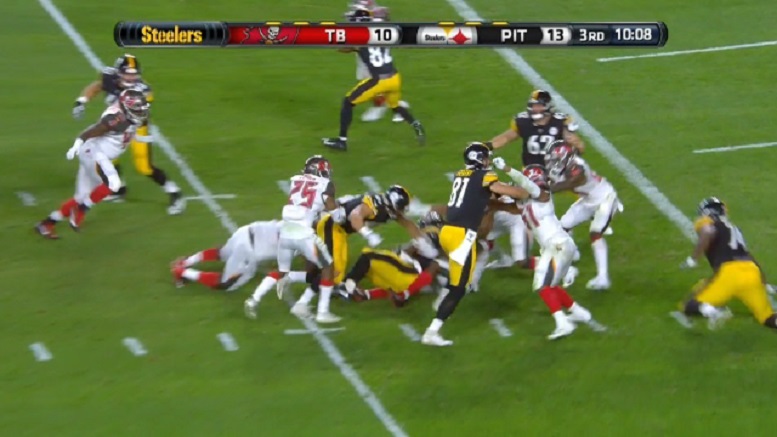 Pittsburgh Steelers rookie tight end Zach Gentry made his preseason debut Friday night against the Tampa Bay Buccaneers and the fifth-round draft pick out of Michigan finished the contest with 3 receptions for 17 yards and a touchdown. While Gentry should obviously be commended for his play as a pass catcher Friday night, I was more concerned about following up on his run blocking against the Buccaneers.

Not too much to see on this play that resulted in a loss of 2 yards as far as Gentry is concerned. He had a quick battle with his man on the far side of the line before chasing him up the field and out of camera frame.

On this power run to the right side, Gentry is the inside tight end on that side of the line. He effectively tied up the Buccaneers defensive tackle and that was about it. The Tampa weak-side linebacker and weak-side defensive tackle were the two players that ultimately made the tackle of running back Benny Snell Jr..

Another fairly in running play when it comes to Gentry as the direction was to the opposite side of the field from him. For whatever it’s worth noting that Gentry was unable to cut off the inside linebacker after the snap. The play, however, was over by the time that linebacker got to the pile

The goal-line run below was easily Gentry’s best run blocking play of the five he was in on. He was able to get out on the linebacker at the second level and tied him up long enough for running back Trey Edmunds to have scored. The rest of the blocking wasn’t as good and especially that of fellow tight end Kevin Rader. Had Rader and center Patrick Morris and guard Fred Johnson all blocked better, Edmunds would have scored.

Gentry’s final run block of the game wasn’t all that successful and that played a small part in the power run being unsuccessful.  While Gentry seemingly has his man turned out of the hole after the combo block, he can sustain it and No. 78 breaks loose to help get in on the end of the tackle

Conclusion/Summary: 5 running plays obviously isn’t a huge sample size and especially with two of them being to the other side of where Gentry lined up at. As for the 3 others, he seemed to be successful on 2 of them. It would be nice if we had access to the all-22 tape during the preseason, but we don’t. That said, we’ll continue to monitor Gentry’s run blocking the rest of the preseason and thus this isn’t likely to be the last Film Room segment dedicated to his blocking.