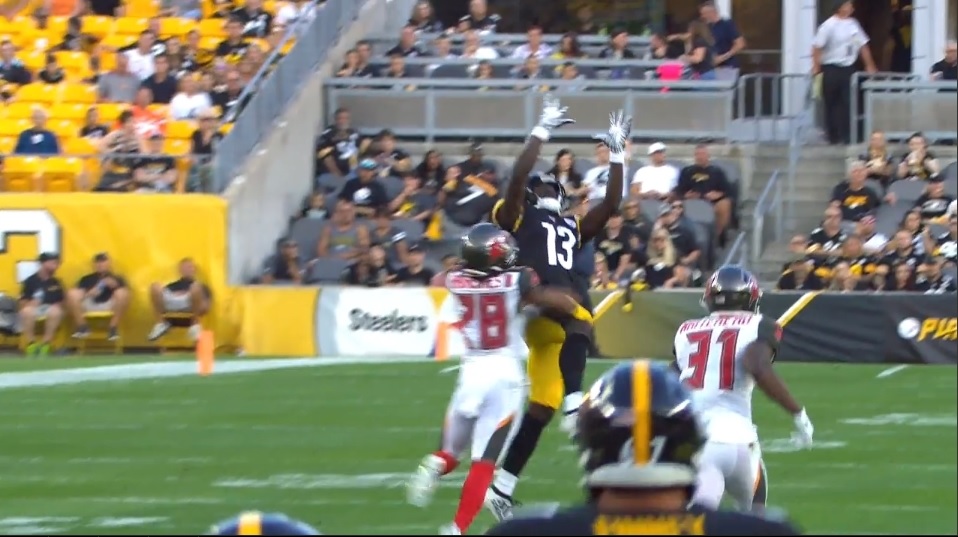 Pittsburgh Steelers quarterback Joshua Dobbs started the team’s first preseason game of 2019 Friday night against the Tampa Bay Buccaneers and the former fourth-round draft pick out of Tennessee completed 5 of his 8 total pass attempts for 85 yards with no touchdowns and no interceptions, however, he almost had one of each. With Dobbs’ play Friday night being both highly criticized and highly praised by different sets of fans and analysts, below is a very detailed and objective breakdown of all 10 of his pass attempts Friday night.

Dobbs’ first pass attempts was down the left seam to wide receiver James Washington that was under-thrown slightly. 39 air yards from the line of scrimmage on this throw to his left and Washington went up and got it for a gain of 43 yards. 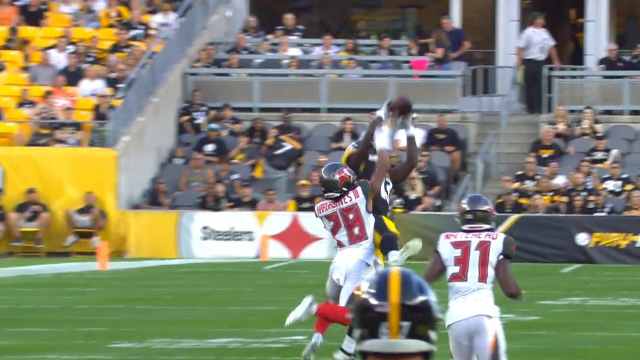 Dobbs’ second pass attempt of the game was a quick slant to the right side to wide receiver Tevin Jones. 5 air yards and on target for a gain of 6 yards. 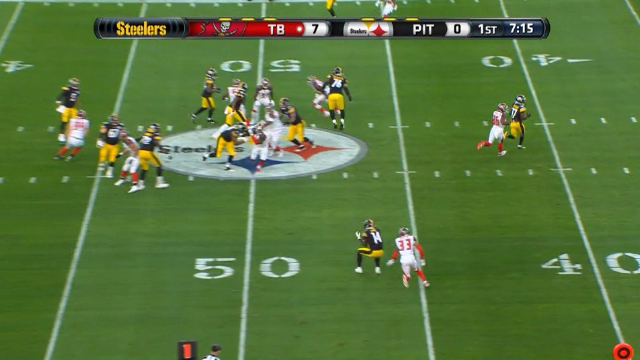 This third pass attempt by Dobbs was intended to go 19 air yards to Jones down the left seam. It was an ill-advised 3rd and long throw by Dobbs and it sailed high from him as well. In reality, Dobbs is lucky this throw wasn’t intercepted. 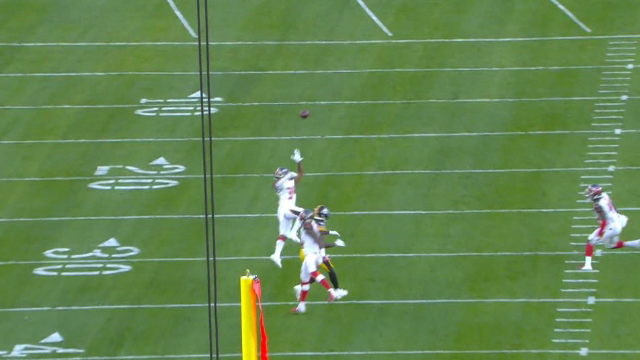 Dobbs went deep with his fourth pass attempt of the game and again it was a throw intended for Jones. This one went down the left sideline and Buccaneers cornerback Vernon Hargreaves got great inside position on Jones and jumped and intercepted the football. For what it’s worth, Jones did get two hands on the football but Hargreaves had better positioning and came down with it. This play didn’t count, however, as it was wiped out by offsetting penalties. 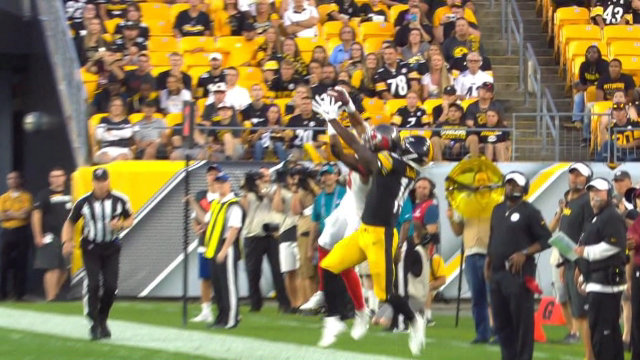 Dobbs’ fifth pass attempt Friday night was a 2nd and 26 check-down to running back Benny Snell Jr. in the middle of the field. 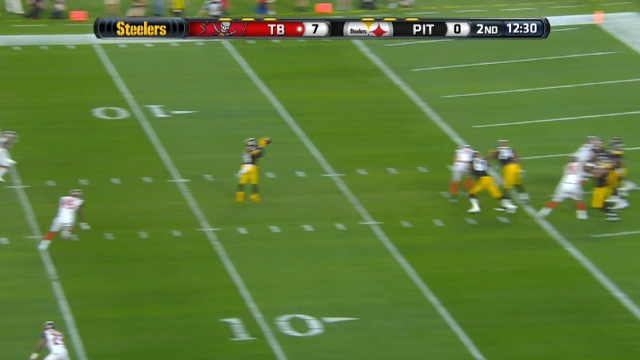 Dobbs converted a 3rd and 21 to Washington via a great throw to Washington on a dig route inside the numbers. He set this throw up with a nice pump fake. This was perhaps Dobbs’ best throw of the game. 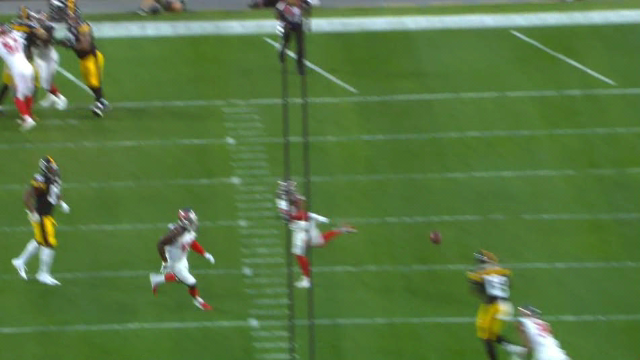 Dobbs’ seventh attempt of the game went complete to wide receiver Ryan Switzer, who had ran a right to left underneath crosser. The seemingly check-down throw was dropped by Switzer. The play would not have counted, however, as the Steelers were penalized for holding. 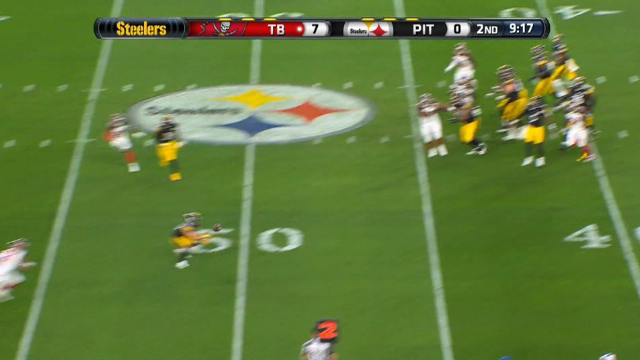 Dobbs’ next pass was a dump-off to running back Jaylen Samuels in the middle of the field and the 3 yard throw resulted in a gain of 9 yards. 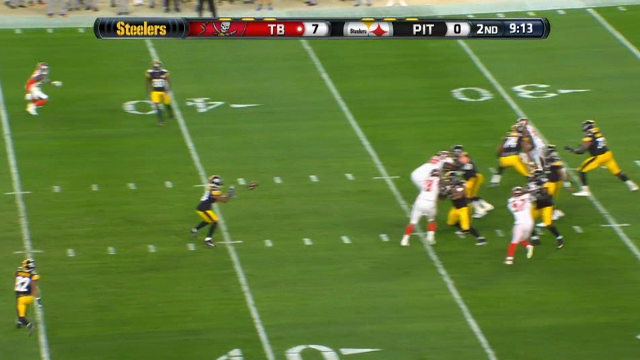 Dobbs threw a nice corer route pass to Washington in the end zone on 2nd and 8 from the Buccaneers 15 yard-line and while the wide receiver did catch it, he was unable to get both feet down in bounds. Quite honestly, Washington provably should have done a better job of getting both feet down as the throw was good enough to do so. Regardless, it still goes down as an incompletion for Dobbs even though it probably should have been a touchdown. 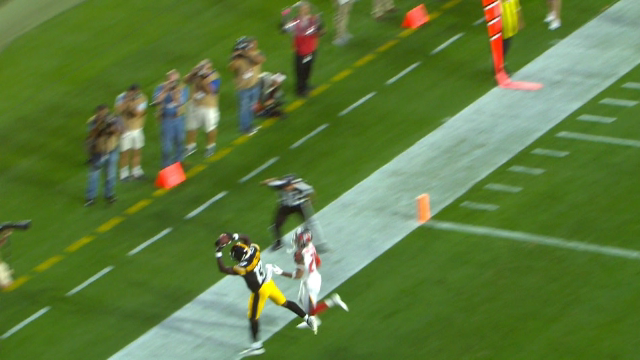 Dobbs’ final attempt of the game came on 3rd and 8 after the incompletion in the end zone to Washington. This incompletion to Snell looked like it was intended to be screen pay and pressure from the Buccaneers defense and a nice read from a Tampa defensive lineman forced Dobbs to get creative with the throw. The pass was a bit low and to the outside of Snell and while the running back did get a hand on the football, he did not catch it. 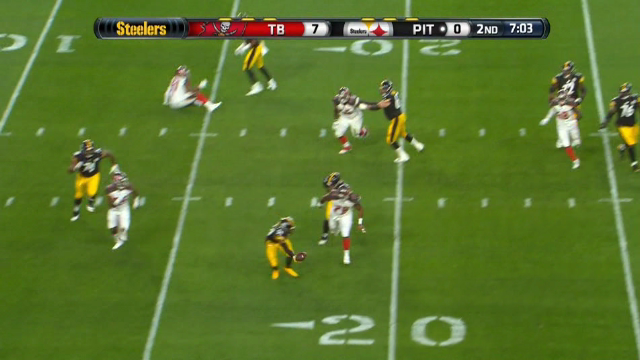 Summary: Dobbs two poor throws to Jones down the left side were his two worst throws/decisions of the game. One was intercepted and wiped out by a penalty while the other one should have probably been intercepted because it was thrown too high and into the middle of four defensive players. On the other hand, three passes that Dobbs threw to Washington were fine even though one was slightly under-thrown. His quick slant to Jones, two check-downs to the running backs were also fine as was the pass to Switzer that he dropped. The last incompletion to Snell on the screen is very excusable because of the way the defense played it. It still could have been caught by Snell. Obviously, Dobbs was far from perfect Friday night but let the evidence show that he didn’t play as poorly as we have seen him play in past preseason games. Had Washington got two feet down in the end zone, Dobbs’ night probably would have been looked at a little more favorable than it seems to be.