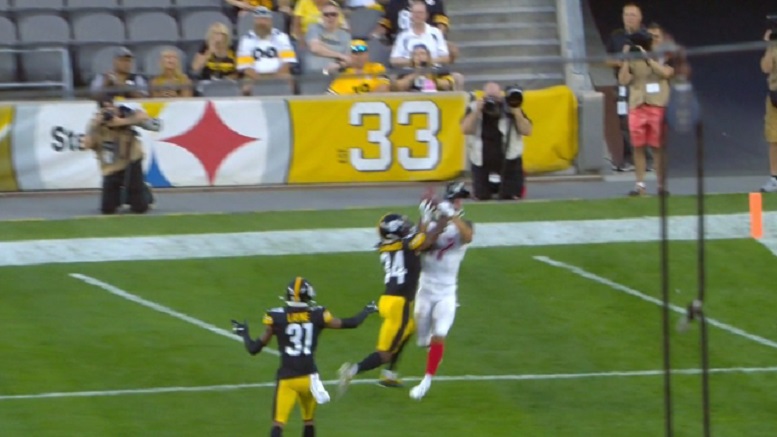 If the Pittsburgh Steelers hope to return to the playoffs in 2019 and then make a run at a seventh Lombardi Trophy, they’ll likely need several of their second year players to take huge steps forward as NFL sophomores. We’ve already highlighted seven of those key second-year players ahead of training camp getting underway and now it’s time to look at how each of those players performed in the team’s first preseason game Friday night against the Tampa Bay Buccaneers.

S Terrell Edmunds – Edmunds played 27 snaps Friday night in the team’s preseason opener against the Buccaneers and he ended with 2 total tackles and a pass defense. While Edmunds did allow one reception for 2 yards on a quick screen that included him missing a tackle, he also had a nice pass breakup in the end zone that included him playing the pocket of the pass catcher extremely well and getting his arm forced up to create the breakup.

WR James Washington – Washington was one of the real bright spots for the Steelers Friday night as the team’s 2018 second-round draft pick out of Oklahoma State recorded 4 receptions for 84 yards and a touchdown in the 23 snaps that he played. Washington would have had another reception and another touchdown had he been able to get two feet in bounds after catching a first half pass from quarterback Joshua Dobbs. Washington also stretched the field early for 43 yards after beating Buccaneers cornerback Vernon Hargreaves on a deep post route. That was very nice to see and it came from the left side of the offense to boot.

T Chukwuma Okorafor – Unfortunately for Okorafor, the team’s second of two third-round draft picks last year, he had a rough go of it in the Friday night preseason opener as the starting left tackle. In the 31 total snaps that Okorafor played Friday night, he was penalized twice for holding and allowed 2 quarterback hurries. Okorafor’s run blocking also wasn’t great in the 12 times the offense ran the football while he was in the game.

QB Mason Rudolph – As we’ve already detailed in a Monday post, Rudolph’s play Friday night against the Buccaneers was very, very good as last year’s first of two third-round draft picks last year completed 5 of his 8 total pass attempts for 91 yards and 2 touchdowns. Of his 3 total incompletions Friday night, 2 of them probably should have been caught. Rudolph took a nice step toward winning the team’s backup quarterback job Friday night against the Buccaneers.

S Marcus Allen – Allen played 30 total defensive snap Friday night and registered 4 total tackles. He was seemingly targeted 5 times in total and allowed 4 receptions for 24 yards and a touchdown. All four of Allen’s tackles Friday night came after pass completions. Allen also played 14 special team snaps against the Buccaneers and while he didn’t register any snaps in that phase, he didn’t stick out negatively.

RB Jaylen Samuels – Samuels only played 8 offensive snaps in the preseason opener. He touched the football three times for 30 yards with one of those being a run of 22 yards through a nice hole. Samuels also played 8 special team snaps Friday night and was flagged for holding on one of the punt returns he was in for.

OLB Olasunkanmi Adeniyi – Last years undrafted free agent of Toledo not only started Friday night against the Buccaneers, he also played 49 total defensive snaps and 14 total snaps on special teams. He registered 3 total defensive tackles during the game along with two quarterback hits and a hurry. He played on both sides of the defense as well. Additionally, Adeniyi was credited with one solo and one assisted tackle on special teams Friday night and it was great to see him finally produce in that phase of the game.