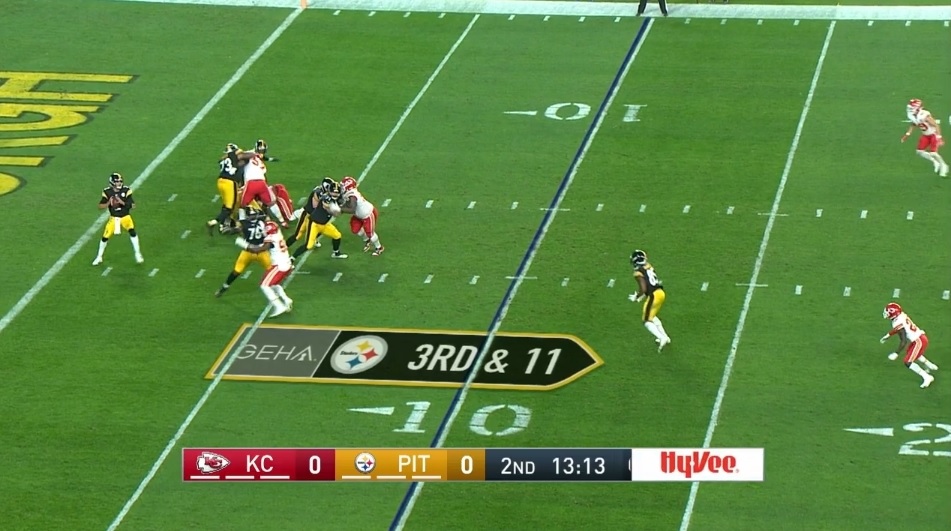 Lightning delayed the kickoff for tonight’s game by about an hour but the matchup between the Pittsburgh Steelers and Kansas City Chiefs was anything but electric at its early stages though the Steelers managed to weather the storm and defeat the Chiefs 17-7.

Both offenses were sloppy right from the get go as both teams suffered through drops, fumbles and poor play. The Steelers and Chiefs traded turnovers early in the first quarterback as Terrell Edmunds forced a fumble, which was recovered by Sean Davis. The Steelers feeling a sense of generosity, gave the football right back as Donte Moncrief fumbled on his first reception. The sloppiness continued to close the first quarter as Diontae Johnson fumbled a punt return which was luckily recovered by the Steelers while Chiefs’ quarterback Pat Mahomes did not look like his usual MVP type form going just 2/5 in limited action.

After weathering their early first quarter struggles, the Steelers came storming out of the gate in the second quarter. Backed up against his own goal line, Mason Rudolph, in his first preseason start, orchestrated a 14-play, 94-yard drive that took up over eight minutes. Rudolph completed seven of his eight pass attempts on the drive with Jaylen Samuels walking in untouched from 14-yards out to give the Steelers a 7-0 lead.

After being let down by drops, Rudolph found his rhythm in the second quarter and shined once again in his second preseason showing.

After surviving Mahomes, the Steelers defense allowed a long drive of their own against backup Chad Henne. Facing a long 3rd and 15, Henne found receiver Mecole Hardman between three defensive backs in the end zone to tie the game at seven.

Rudolph’s night was done following his touchdown drive and while he had a very good showing, Josh Dobbs was very inconsistent coming into the game in relief. Dobbs finished 6/11 and threw an interception in the red zone near the end of the first half as he overthrew his intended target.

Deadlocked at seven, the Steelers pulled ahead with a field goal early in the fourth quarter. The drive did not come without its fair share of controversy as Dobbs looked to have connected with Johnson on a back-shoulder touchdown pass but offensive pass interference negated the score. The questionable call was confirmed after a booth review and forced the Steelers to settle for a Matthew Wright field goal, putting them ahead 10-7.

Johnson would be back to get revenge as the rookie wide receiver put the dagger in the Chiefs, catching a 24-yard touchdown pass from Devlin Hodges. After muffing a punt earlier in the game, Johnson had quite the comeback, finishing with three receptions for 46 yards and a touchdown.

The Steelers’ defense proved to be as opportunistic as ever, forcing three fumbles and notching three sacks. Two of the three sacks came at the hands of Bud Dupree, who is looking as hungry as ever as he enters a contract year. The third sack came from none other than Tuzar Skipper.

Skipper also added a fumble recovery tonight and with Ola Adeniyi out injured, the undrafted outside linebacker is having a great audition. Skipper has recorded two sacks and five quarterback hits in two preseason games thus far.

The Steelers will resume their preseason action next Sunday when they take on the Tennessee Titans at 8 P.M. EST.