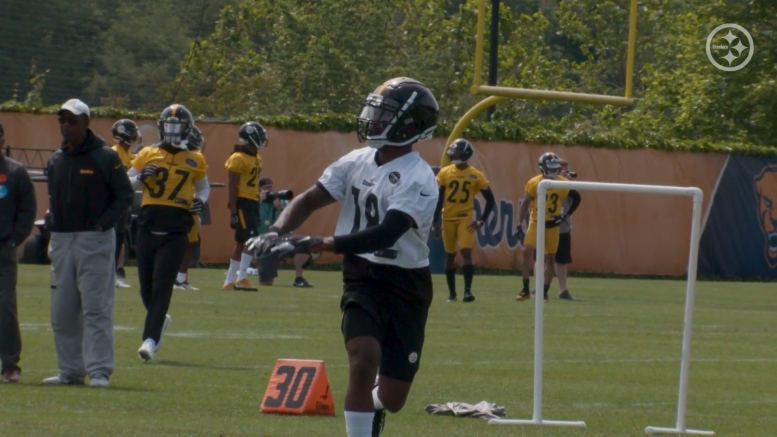 Pittsburgh Steelers rookie wide receiver Diontae Johnson returned to practice this week after missing the first preseason game, so he is anticipated to make his debut later tonight. The fourth pick in the third round has had his ups and downs in multiple ways during the 2019 offseason as he prepared for his first NFL season.

The most frustrating part, for both Johnson and the organization, has been the injuries that he has dealt with. He had a groin injury back in rookie minicamp that lingered throughout the spring, for example, and wasn’t in the greatest shape. He reported to training camp in better shape, but injuries have still shelved him for some time.

Earlier in the week, quarterback Ben Roethlisberger was asked about Johnson. “You’d like to see him on the field, because then you can kind of see what he can and can’t do”, he said. The two haven’t gotten a ton of opportunities to get that on-field work in yet because the rookie’s health has also made it difficult for him to get reps with the first team when Roethlisberger is on the practice field.

The quarterback did express some understanding of the situation, and after all, he should, because it’s not as though he has any limitations in his exposure to the practicalities of a rookie season from Mike Wallace, Antonio Brown, and Emmanuel Sanders to Markus Wheaton, Martavis Bryant, Sammie Coates, and JuJu Smith-Schuster.

The good news is that the Steelers are not expecting Johnson to be a major contributor right off the bat, with Smith-Schuster, Washington, and veteran free agent signing Donte Moncrief expected to shoulder the bulk of the load. Veteran slot receiver Eli Rogers also seems poised to play a role early on in the season as well at the very least.

“As we start to break here, guys usually start getting healthier, and I hope we can get him on the field more and see what he can do”, Roethlisberger said regarding Johnson. “Because he’s got some talent. He really does”.

He has been pretty complimentary of Johnson throughout the offseason, really, when speaking specifically about what he is able to do on the field when he has that opportunity. His route-running and ability to separate have been impressive, but of course he has more in his game to work on, including eliminating some of the drops he’s had in training camp.