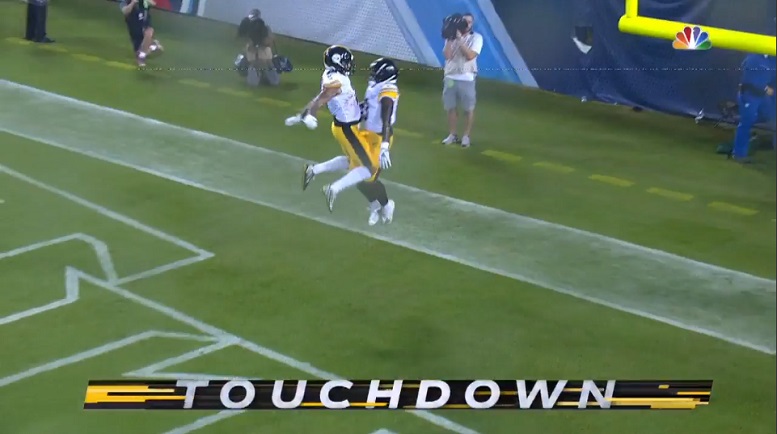 The Pittsburgh Steelers entire first-team offense was on the field Sunday night against the Tennessee Titans for the first time this preseason and while that unit only produced 6-points in those three possessions, there were several positive signs not related to stats. One thing the Steelers offense displayed a lot of Sunday night was selflessness and quarterback Ben Roethlisberger best defined how that was seen during his post-game talk with the media.

“Guys were starting to get a little tired, it was humid out there,” Roethlisberger explained of what had transpired during the Steelers’ third offensive possession of the game, according to Mike Prisuta of steelers.com. “I kinda subbed JuJu [Smith-Schuster] out. I could tell he was gassed, and I said, ‘Hey, give us No. 13. [James Washington]’ I think that’s what is special and can be special about this group is the selflessness. I think every guy knows to be good we need to stay fresh.”

Were Roethlisberger’s postgame remarks about the wide receiver’s selflessness Sunday night him taking a subtle shot at former Steelers wide receiver Antonio Brown? I certainly can see how they might be construed as such and especially based on another quote of his regarding the topic of wide receivers graciously subbing out during the Sunday night preseason game.

“I think you’re going to see more of that than you probably ever have on this team, that guys will be OK kind of subbing out and rooting for their buddy to score and to do good things and make plays for us,” Roethlisberger said.

Even wide receiver JuJu Smith-Schuster spoke on the selflessness topic after the game against the Titans was over with.

Smith-Schuster even provided an example of some selflessness from the Sunday night that is worth passing along.

“It was so crazy. We were doing no-huddle and I got tired, so I went out for a couple plays,” said Smith-Schuster. “Then we got the first [down] and then I go back in and James Washington, that was his play. That was his post. So, I go in, I take his place. I take his touchdown, basically. And then a couple plays later, he scores his post. I’m supposed to start that series, but I said ‘Like no, bro. You take it.’ and he ends up getting a post.”

The selflessness that’s already being displayed by the Steelers wide receivers during the preseason is certainly great to see and you can bet that Roethlisberger appreciates that. With the very selfish Brown now out of the picture, Roethlisberger might need to spread the football around in 2019 to all eligible a lot more than he’s done in recent years. At the very least, he shouldn’t have wide receivers chirping in his ear throughout games demanding the football be thrown to them and throwing water coolers on the sideline when they feel they aren’t being targeted enough.

The Steelers 2019 wide receiver group already seemed to be a tight-knit bunch throughout the spring. That said, the recent and sudden passing of Steelers wide receivers coach Darryl Drake seems to have brought these young men even closer together and that’s never a bad thing in a game that’s often referred to as being the ultimate team sport.