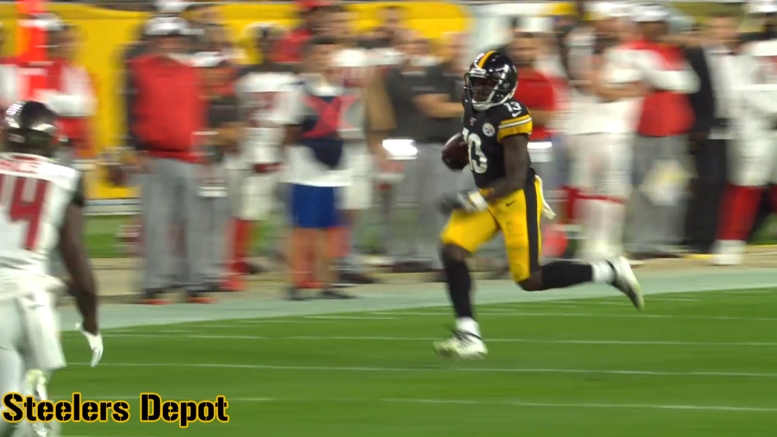 There have already been quite a few positive things said so far this week about Pittsburgh Steelers second-year wide receiver James Washington. Both offensive coordinator Randy Fichtner and wide receiver JuJu Smith-Schuster said Wednesday in separative media sessions that they believe Washington is poised to have a much better second season in the NFL than his rookie season.

On Thursday, Steelers quarterback Ben Roethlisberger also jumped on the Washington optimism train during his weekly media session when asked to comment on where’s he sees the Oklahoma State product at now as opposed to where he was during his rookie season.

“I think that he took great strides because, physically, obviously everyone’s seen what he’s done in terms of losing weight, but getting stronger,” Roethlisberger said of Washington. “I think he’s gotten a bit faster. But mentally you don’t see the mistakes, you don’t see the confused look sometimes, which any rookie is going to have that, it doesn’t matter what position they play.

Not long after he arrived at Saint Vincent College in Latrobe for the start of the team’s 2019 training camp, Roethlisberger talked to the media about what he was looking for in the ways of details out of his wide receivers for the remainder of the offseason.

“I know what they can do. I know they can catch. I know they can play,” said Roethlisberger. “I want to see who makes the least amount of mistakes. Who can get a subtle handle signal? Who can interpret even visual signals, looks and things like that? That is the fun part. That is the part I enjoy, and they have enjoyed so far. Just seeing how we can mesh together.”

According to what Roethlisberger said on Thursday, Washington has made great strides since the end of July and throughout training camp and beyond when it comes to him mastering the minute details related to his position that his quarterback spoke of.

“So, you come in and you give him a hand signal and you tell him what to do and he’s doing it,” Roethlisberger said of Washington. “And I think the biggest thing that people wouldn’t know is it’s not just at his position. I can move him to other positions and he’s still doesn’t skip a beat. So, to me, it just shows all the hard work he put in this offseason.”

Those are certainly some encouraging comments from Roethlisberger on Washington, who has had a great preseason to date. Not only has Washington shined so far in the Steelers first two preseason games, he has indeed moved around some in the offense and even both of his deep receptions have come with him being lined up on the left side of the formation. That’s a big development in and of itself as Washington predominantly lined up on the right side of the Oklahoma State offense during his entire college career.

Sunday night in the Steelers third preseason game against the Tennessee Titans, Roethlisberger will make his 2019 debut and likely play at least two offensive series and maybe even more. Roethlisberger made it clear on Thursday that despite his expected limited playing time Sunday night against the Titans that he hopes to get some work in with all the wide receivers that might see playing time with him during the upcoming season.

“I’m gonna try and get on the field as many of them as possible,” Roethlisberger said. “I think we’ll rotate receivers in. So, I think everyone will kind of get a little bit of time, because we want to be able to play that way this year. Like, we don’t want to just have guys be on the field and wear themselves out. Like I’m emphasizing that when we do our two-minute, when we do our no huddle, that if you need a quick breather, just take one. Like we’ve got guys that can step up and step in and be ready to go.”