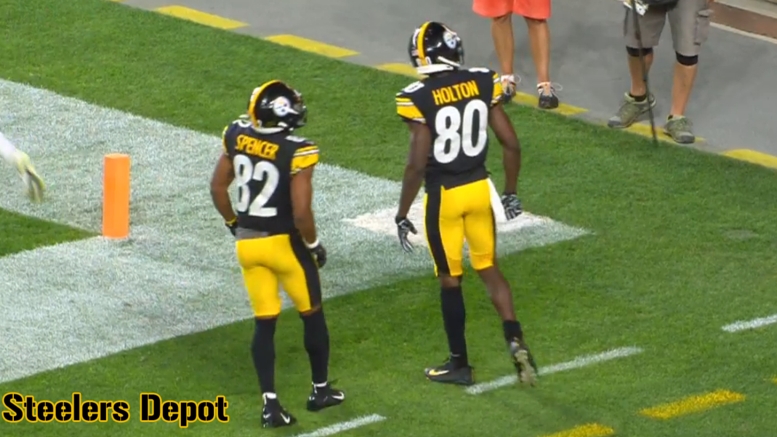 The preseason is often a time for optimism, where everyone is convinced that every roster is full of amazing players, too many to actually make the team, and that any player released is surely going to be claimed by another team and go on to have a good career.

That rarely happens. But the Pittsburgh Steelers do appear to have a bit of a deeper roster than they have usually had, even if that doesn’t necessarily translate in seeing them manage to trade some players in the coming two days. They may, but whether or not they do so, there appear to be more than 53 players deserving of a roster spot.

We’ll start at wide receiver, perhaps the deepest position, where we have at least seven players, and possibly more, worthy of discussion. Six have already been on rosters before, plus rookie third-round pick Diontae Johnson, who is obviously going to make the team.

The other locks are JuJu Smith-Schuster, Donte Moncrief, and James Washington, but Eli Rogers, Ryan Switzer, and Johnny Holton have all been on rosters before. the former two have been with the Steelers, while Holton was previously with the Raiders and signed this offseason. He had a strong preseason finale to push his name into the discussion, though it’s likely too little, too late for Diontae Spencer.

Another area that is deep is at linebacker. There are five incontrovertible locks in Devin Bush, Mark Barron, and Vince Williams on the inside and Bud Dupree and T.J. Watt on the outside. Anthony Chickillo, Tyler Matakevich, and Olasunkanmi Adeniyi are all on the inside of the bubble.

But there’s still Tuzar Skipper. There’s still Jayrone Elliott, who was just signed and played well last night, and has prior NFL history. And there’s Sutton Smith, who finally got a good look and produced last night as well. And of course there’s Ulysees Gilbert III on the inside, who is likely to make the team, and Robert Spillane, who has done nothing but perform.

The cornerback position appears to have the exact right number at six, though we will have to wait to hear word on Justin Layne’s health. At safety, we have a bit of a bottleneck with five, Marcus Allen and Jordan Dangerfield competing at the end.

I’ll have my 53-man roster prediction up in just a bit after this goes up, but there are at least three or four players who will not make the team who are undeniably good enough, and that is not including Devlin Hodges, who frankly did not get a good enough opportunity in terms of quantity and quality to fully state his case. You could even have that discussion on the offensive line with Jerald Hawkins and Patrick Morris, perhaps even Fred Johnson.