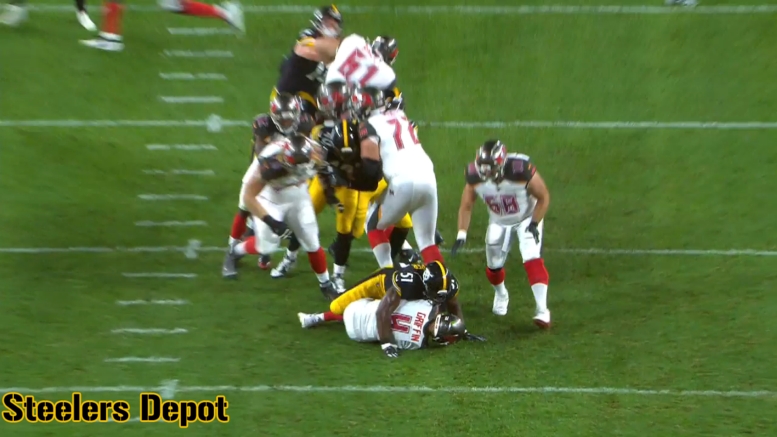 The preseason is just about over, with each team having just one game left to play, and soon after that, the league will cut almost 1200 players, only a portion of which will be re-signed to practice squads. Here is the beginning of the end of the journey for many professional athletes, or those who aspire to be one. Some come back every year and keep trying. A small fraction of them eventually succeed. It’s the dark side of the business that sucks to think about.

But that’s where we are, and it’s what the final preseason game is all about. Whose dreams are going to come true, and whose will have to wait, or be lost for good? The Pittsburgh Steelers have a number of dream-seekers on their 91-man roster, including some real longshots when they first came in here.

Such as Tuzar Skipper, a defensive end out of Toledo, a MAC school. Skipper not only went undrafted, he went unsigned thereafter. He was invited to participate in the Steelers’ rookie minicamp, and now he’s here three months later, on the verge of determining whether or not he’ll be here much longer.

The outside linebacker has done about as much as he can defensively, registering three sacks, one forcing a fumble, and playing the run well, but his roster viability may come down to the team’s belief that he can contribute on special teams.

That’s why Pro Football Focus named him the player to watch for the Steelers tonight as they face the Carolina Panthers. “Get to know Tuzar Skipper”, they wrote. “The undrafted Toledo product has been quite the surprise for the Steelers’ defense so far this preseason, as Skipper has recorded nine total pressures, seven defensive stops and a forced fumble en route to a 90.4 overall grade across 112 defensive snaps this preseason. He’s done everything and then some to earn a spot on the 53-man roster”.

Everything except playing special teams, something that he said he is very willing to do, and something that he did in college. Right now fellow rookie inside linebacker Ulysees Gilbert III has the inside track on a ninth linebacker spot on the roster, and the team has only kept 10 to start the season once under Mike Tomlin.

In front of him at his own position are T.J. Watt and Bud Dupree in the starting lineup, as well as veteran Anthony Chickillo and Olasunkanmi Adeniyi going into his second year. Adeniyi was his teammate at Toledo and went undrafted last year, making the roster but spending most of the season on injured reserve. He is recovering from an injury that he suffered in the first preseason game and may miss time in the regular season.

It’s worth noting that while Adeniyi was injured last year, Watt, Dupree, and Chickillo were the only outside linebackers on the roster, though the team viewed Matthew Thomas as outside-capable. At the very least, Adeniyi being injured won’t hurt Skipper’s chances of making the team.