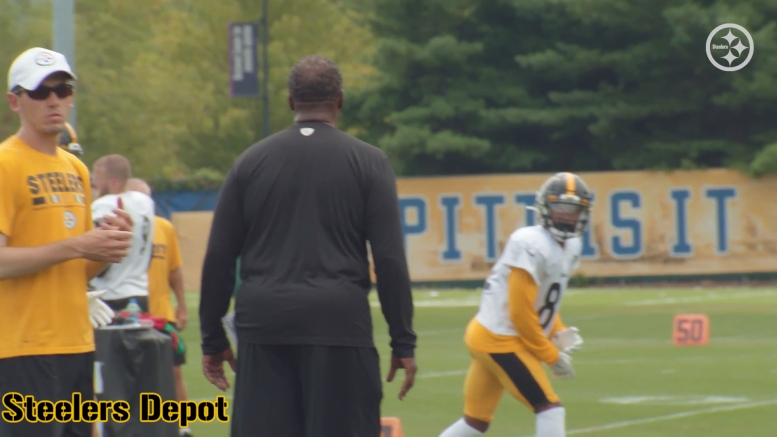 There is no opportune way to replace a coach who has suddenly passed away, as the Pittsburgh Steelers found out earlier this month after wide receivers coach Darryl Drake died in his sleep a little under two weeks ago at Saint Vincent College as he was preparing for his second season with the team.

From a practical standpoint, however, things could have gone even worse. Given the circumstances, the Steelers were fortunate to have a visiting coach on board during training camp who had quite a lot of experience coaching wide receivers—and who had once even been a part of the team’s coaching staff, a couple of decades ago.

That would be Ray Sherman, 67, who was their offensive coordinator in 1998. However, most of his coaching career was dedicated to working with wide receivers. He has been in semi-retirement since 2015 after Jeff Fisher’s staff with the St. Louis Rams packed up their bags and headed to Los Angeles in 2016.

“Ray’s experience and expertise is invaluable, and that’s one of the reasons why he went to camp with us”, head coach Mike Tomlin said of Sherman’s presence since the start of camp, and now after being named the interim wide receivers coach.

“He was initially here as a visiting coach, which we do from time to time. Guys with his type of experience that can sit back and watch us as we instruct so we can glean information about how to better do our jobs. So that was his original function”.

It’s common practice for teams to bring in coaches of a variety of pedigrees to work in training camp in some capacity. Sometimes that’s primarily for the benefit of the team. At other times, it might be to help instruct a young coach. William Gay is among those helping out with the wide receivers.

Sherman’s retirement and return is similar to that of Richard Mann’s. Mann was out of the NFL since 2009 before Tomlin phoned him up and hired him in 2013 following the departure of Scottie Montgomery. Drake was Mann’s replacement, and now Sherman steps into the role.

“Obviously, circumstances changed, and I’m glad he was available and familiar with us, and us with him, so we’re gonna try to push forward, and he’s gonna put his hand in the pile and instruct our receivers, and we’re completely comfortable with his overall readiness and capabilities there”, Tomlin said.

To be able to have at least some semblance of continuity through such tragedy, and especially given the timeline, occurring during the preseason, is fortunate. Sherman is a more than qualified instructor, who, by the way, can also share in the team’s feeling of loss, considering his own history.

As Tomlin said, his experience and expertise, both on and off the field, will be invaluable this year as he manages a young and inexperienced but very talented group of wide receivers, especially those in whom Drake had a hand in drafting: James Washington and Diontae Johnson.