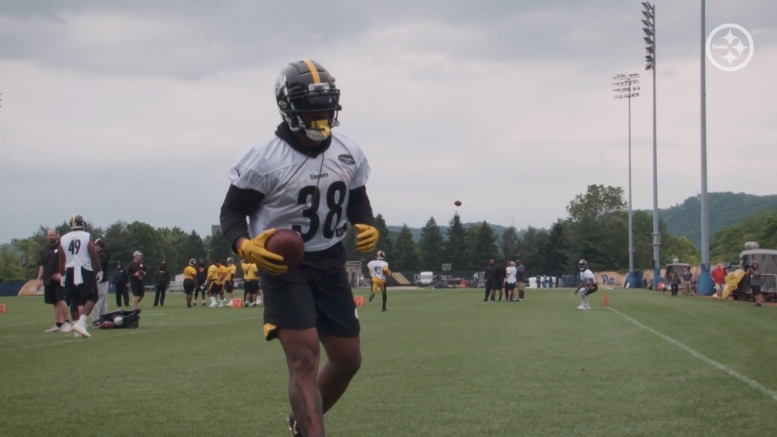 Even though he hasn’t gotten a lot of the reps in practice as the established veteran at the position, Pittsburgh Steelers running back James Conner has largely remained the focal point of attention in the backfield. Effervescent rookie running back Benny Snell, Jr., between his personality and then matched by his performance, has become the talk of training camp as well.

It’s almost to the point that second-year running back Jaylen Samuels has been put on the back burner, as far as media coverage goes, but that’s certainly not how Head Coach Mike Tomlin and the Steelers offense are approaching him. That includes but is not limited to seeing him work in pony backfield looks with Conner, often flanking out wide or into the slot.

Tomlin was asked yesterday if what he saw positively in Samuels from his rookie season is something the young back has been able to carry over into his second training camp. “He has”, his coach told reporters during his pre-game press conference.

“Really, it just starts with the overall level of conditioning”, he added. “There really is a significant difference in his level of conditioning in this setting this year as opposed to last year, and it’s reasonable to expect that. The same can be said for James Washington. But I think it’s been a springboard for both guys and others in their class to get an increased level of production and consistency, and we’ve gotten that from him”.

This has become the norm for running backs, particularly those that the Steelers draft, because they tend to have a preference to draft bigger-bodied backs. That included Le’Veon Bell in 2013, who was bigger in college than in his rookie season, but really transformed his body in year two.

Of course, the hope is that that won’t be entirely necessary, because in such a case it would likely mean that there are injuries that are prompting him to take on a larger role. He did start three games toward the end of last season, but he looks to be best suited as a complementary player with an emphasis on the receiving game.

Still, it’s hard to complain about a young player getting into the best shape of his life after getting a full taste of the NFL experience. It will only serve to make the offense better, and thus the team as a whole, by strengthening the backfield.