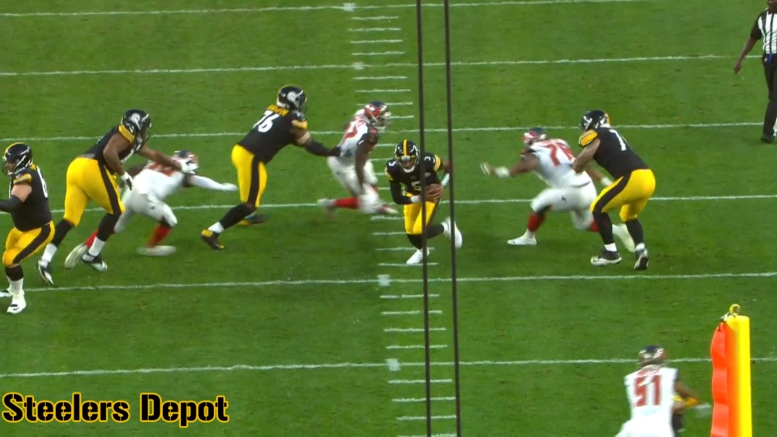 The Pittsburgh Steelers managed to get three quarterbacks into tonight’s game for extended looks, but the first one out of the gate was the one who spent last season as Ben Roethlisberger’s backup. That would be third-year Joshua Dobbs, the 2017 fourth-round pick who put together a strong preseason a year ago to not only claim that job, but to save his roster spot.

He could be in a similar position this summer, with his roster spot potentially vulnerable, but this time around, he’s the incumbent backup with the confidence and experience in that role, and an increasing comfort level in the ability of his mobility to be an asset to him.

While he struggled with short and intermediate accuracy, Dobbs did connect on a couple of nice passes to James Washington, including one that went for 43 yards. But two of his most notable plays were a pair of scrambles on third downs.

Both scrambles came on the same drive early in the second quarter. He found the defense in man coverage on third and four from his own 38 when he took off up the middle for eight yards. Three plays later, on third and nine, he got out to the right side for the first down and more, running free through the secondary for 36 yards.

Similarly, two of Dobbs’ best plays from his extended look in the regular season last year were a pair of scrambles against the Oakland Raiders to move the chains. He has also used his legs meaningfully in the preseasons of the past.

Head Coach Mike Tomlin was asked following the game to evaluate Dobbs’ use of his agility during the game relative to his discouraging the use of it during practice. “I’ve always liked his prudent use of agility and escapability”, he said. “I thought it’s been an asset to him in the past; it was an asset to him tonight. The key is the prudent use of it, and he did a nice job”.

In order for Dobbs to be successful at the NFL level, his athleticism and speed have to be a meaningful asset to him in order to compensate for some of the shortcomings that continue to appear in his game. As mentioned, his struggles with accuracy, particularly on short and intermediate passes, are going to help put him in situations in which he has to convert some third downs with his legs when the defense gives it to him.

Overall, he completed five of eight passes for 85 yards on the night, but did not record a touchdown. He had a pass intercepted that was negated by offsetting penalties, which came earlier on the same drive as his two scrambles, and which ultimately led to a field goal, his only points on the two drives and 19 plays that he had in the game.