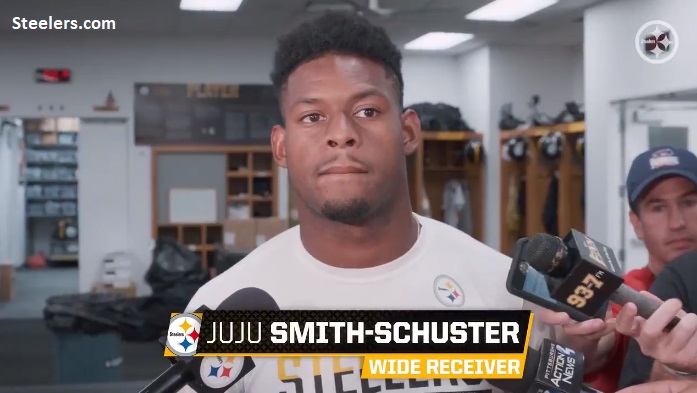 The Pittsburgh Steelers will play their third preseason game of 2019 Sunday night on the road against the Tennessee Titans and that contest should include quarterback Ben Roethlisberger seeing his first exhibition action of the year. Wednesday morning, Steelers third-year wide receiver JuJu Smith-Schuster talked to the media and during his session he was asked what it is that he’s hoping to get out of the team’s third preseason game Sunday night.

Smith-Schuster was then asked how important he thinks it is to have Roethlisberger playing Sunday night and if it helps to get a rhythm going with the starting quarterback.

“I mean, it gets the rhythm going,” Smith-Schuster said. “You know, like I said, building that connection, that chemistry between everybody. Obviously, we have like veteran guys who’ve played here before, but you know guys like [Donte] Moncrief, you know he’s new to the system. Like I said, Diontae [Johnson] and, you know, Snell, you know, those are the new guys that have to get used to how Ben plays his game. And you know, when we do like two minutes, no huddle, so yeah, it’ll be fun for them to get used to it.”

We aren’t likely to get a better idea as to how much Roethlisberger will play Sunday night against the Titans until Friday as that’s when Steelers head coach Mike Tomlin is scheduled to hold his pre-game press conference. At that time, we should also get a clue as to whether or not two of the team’s starting offensive linemen, center Maurkice Pouncey and guard David DeCastro, will be making their 2019 preseason debuts Sunday night along with Roethlisberger.