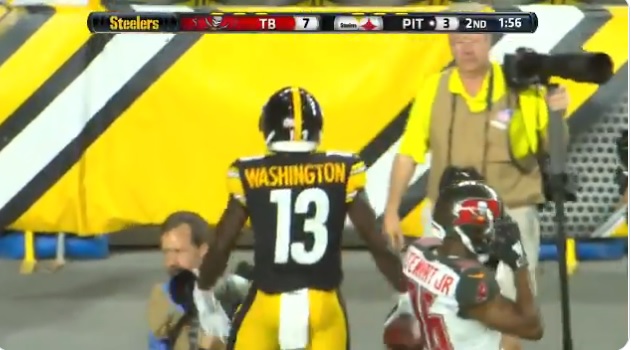 So a lot of things are going to change now that Brown is with the Oakland Raiders. At least in theory. But former Steelers running back Jerome Bettis doesn’t expect to see a lot of differences, as he told Ron Cook and Joe Starkey on The Fan earlier this week.

“I think it’s gonna be very similar”, he said when asked about his expectations for how the offense will differ without Brown. “I think you’re gonna see the same type of plays; it’s just gonna be a different name that’s on the back of the jerseys that’s being thrown to”.

The name on the jersey that’s going to be thrown to most now is that of JuJu Smith-Schuster, entering his third season. He was the number two receiver for most of the past two years, and now will have to take on all the attention. But he will be supplemented by an encouraging group of younger players as well, who should be able to keep the offense going as he has been.

One thing that Brown probably didn’t get enough credit for over the years was his deep ball abilities, though in truth many of the deep-ball receptions he has had over the years were not necessarily by design, but rather improvised, thanks to his chemistry with Ben Roethlisberger. But he has to build that chemistry with others now, such as James Washington.

“Some of the guys got to step up. James Washington’s gonna have to play extremely well. JuJu’s gonna have to take it to the next level”, Bettis said. “These guys know that they’re gonna have to increase their production and become the stars that they can be”.

Of course, we won’t know exactly how it all will play out until we get into the heart of the regular season, and even then it could still be trial and error as defenses adjust to the Steelers’ new personnel and the new personnel correspondingly adjusts.

And underdiscussed element of running the new Brown-less offense is going to be Randy Fichtner, entering his second season as offensive coordinator. Can he put together the offense that successfully limits the need for a player like Brown to so consistently perform, something more akin to the Los Angeles Rams?