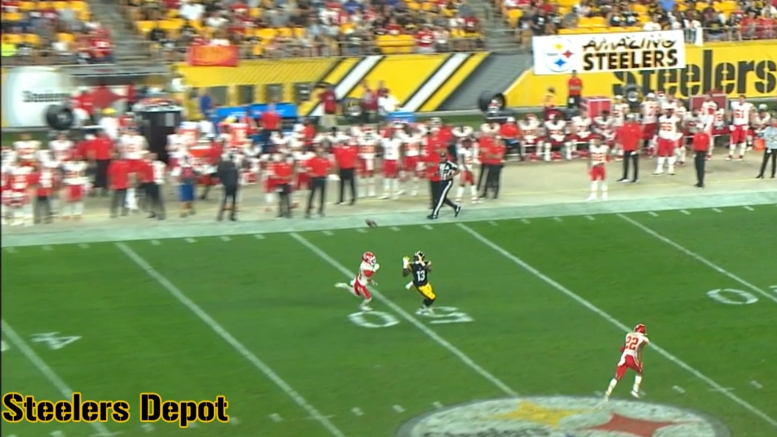 Second-year wide receiver James Washington was one of the big contributors to the Pittsburgh Steelers’ winning effort in the first preseason game. The question was whether or not he could do it again. Even though he did not start the game—Eli Rogers was in the slot, flanked by JuJu Smith-Schuster and Donte Moncrief—he once again led the team in receiving yards, with some nice catches.

Offhand, I don’t know when exactly he first got into the game, but his first target was on the opening drive of the second quarter, Mason Rudolph finding him on third and 11 for 22 yards. Lined up outside the numbers on the right side from the Steelers’ own 10, he caught the ball in traffic coming over the middle of the field, showing good situational awareness.

Rudolph came back to him two plays later on second and four, throwing a high pass outside the numbers that the second-year receiver was able to go up and pluck out of the air to secure the reception, and the new set of downs. The defender was playing off, so he broke back toward the line of scrimmage and helped his own college teammate out with the great snare.

His third reception of the game would come from Joshua Dobbs, on the first play of a drive beginning with just over a minute to play in the second half. It was Dobbs’ first snap in the game, from the 17-yard line following a kick return. Here, he worked out of a bunch set to the left and used his second gear to speed by the defensive back to make the big 40-yard grab.

Dobbs would target Washington twice more in the second half, the first on a deep shot, but the play was well-defended by rookie Mark Fields. Two plays later, on third and six, he took a pass on a shallow crosser and was able to slip out of a tackle at the line of scrimmage, but was brought down just shy of a first down. Still a nice effort.

All told, he finished with four receptions for 78 yards, which gives him eight receptions for 162 yards and one touchdown. Last season, he had only one big preseason game, catching five passes for 114 yards and two touchdowns, so it was important to see if he could put together strong performances in consecutive weeks.

The former second-round pick is off to a good start in his second season as he seeks a role in the offense. For the moment, he appears to be in-line for the majority of the number three receiver snaps between Smith-Schuster and Moncrief, but if he continues to produce, he will continue to get more playing time.