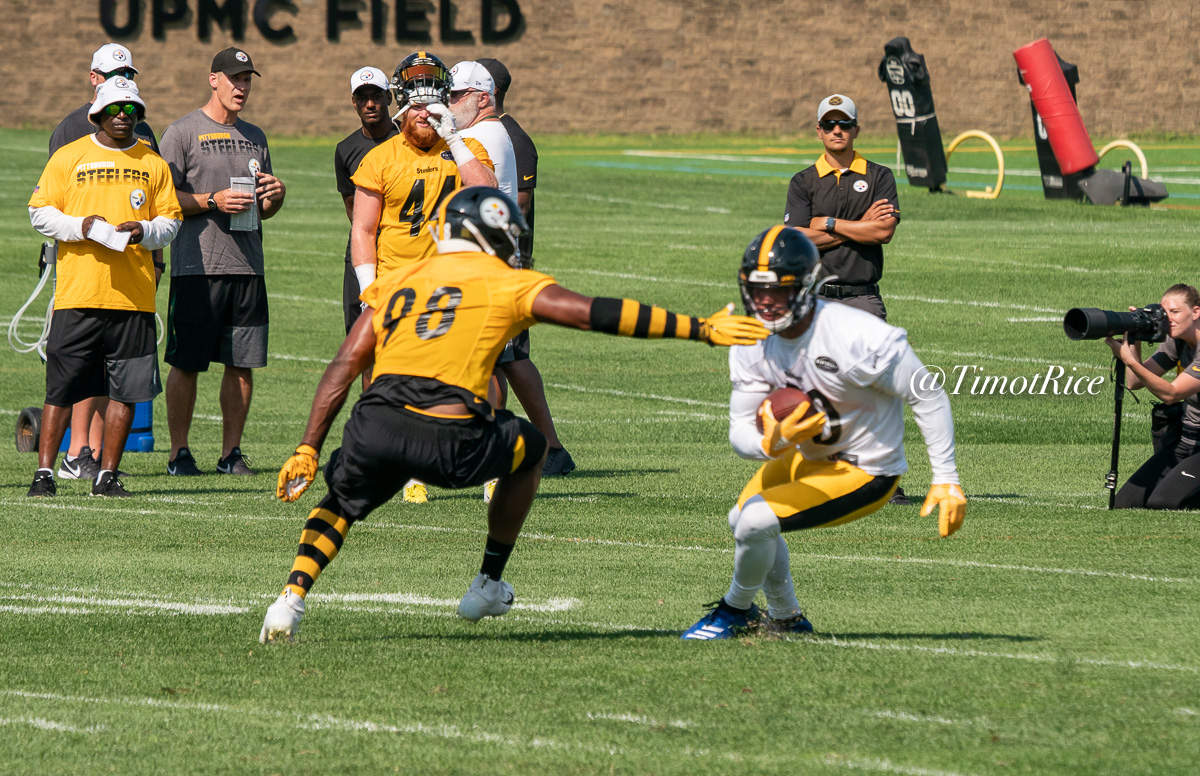 It was just last year that players like James Conner and JuJu Smith-Schuster were the ‘young guys’ for the Pittsburgh Steelers, unproven or largely unproven skill players with high pedigrees who were playing behind significant talents. Both of them stepped up in a major way, however, in 2019.

And they did so in such a way that allowed the coaching staff and front office to feel okay about allowing them to take the center stage in the offense this year, sans a pair of former first-team All-Pros in Le’Veon Bell and Antonio Brown.

Conner started the 13 games he played in last year, aside from the finale after he returned from an ankle injury. He rushed for just under 1000 yards at 4.5 yards per carry with 12 rushing touchdowns, adding another 497 receiving yards an 55 receptions and another score.

But he has also been emerging not just on the field but in the locker room as well. This was something that became obvious when he was talking to Michael Irvin following yesterday’s practice in an interview for the NFL Network, the way he was talking about the rest of the running back group.

Asked why he wasn’t practicing as much and if he was feeling healthy, he said. “Yeah, I’m feeling pretty good. You know, it’s just a couple of things here and there. We’ve got a preseason game coming up so some of those guys need extra reps. We’ve got a really talented room. Those guys will be doing the majority of the playing this preseason, so they’ll get a chance for them to just sharpen their skills up”.

He is referring to the likes of Jaylen Samuels and Benny Snell, Jr., the latter a rookie fourth-round pick, but also Trey Edmunds and all the other running backs on the roster. He is the one with accomplishment, and so even they look to him now.

“It feels good”, he admitted. “I feel like this year I’m kind of stepping into a leader role a little bit more with being the top dog at the position group. I don’t take it for granted, it’s a blessing, but I I’m still getting my work in, even when these days where I’m not practicing, I’m taking them mental reps and I’m still focused and locked in”.

He and Smith-Schuster are in a very similar boat, trying to rise to a new level in their own game while simultaneously taking upon themselves the responsibility of nurturing their position group as a whole and their offense.

It’s a lot to ask of a couple of young players, but both of them seem to display the make-up to be able to handle it all. After all, Conner in particular has certainly gotten through much more difficult challenges in his life.