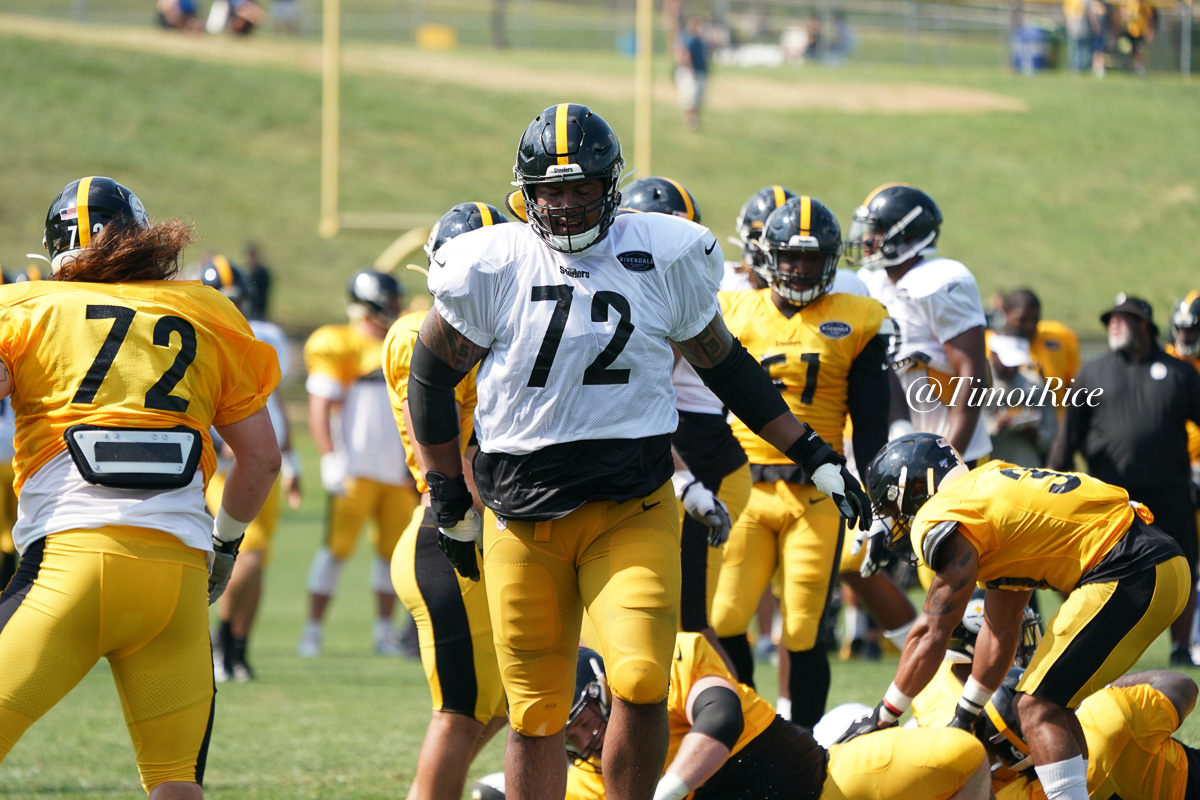 Zach Banner is a large man. A very large man. But in 2017, he was too large. Even by an offensive linemen’s standards. He was 420 pounds, flamed out in Indianapolis and just cut by the Cleveland Browns. An NFL career already hanging in the balance. The Steelers, and let’s be honest, mostly because of injury, waived/injured Kyle Meadows and took a flier on Banner, bringing him into camp in mid-August of last year. Banner got his weight down, shedding 80 pounds since 2017, and spent all of last year on the 53 man roster. Despite the tough competition at tackle, he looks well on his way for a repeat performance.

Banner put in a workman like performance in Friday’s preseason opener against the Buccaneers. For starters, he played a lot. All but the final six snaps. On the whole, they were consistent snaps that highlighted one of his best traits, albeit an obvious one. His size.

Losing those 80 pounds were critical to sticking in the NFL. Being above four bills meant he wasn’t going to have the athleticism or conditioning to play the 59 snaps he saw Friday. But being 6’8, 340 pounds still makes him the biggest dude on the field and able to bully smaller linemen who try to shoot past him.

There’s two good examples of that. At least twice, the Bucs tried to one-gap their smaller d-tackles. Which, hey, going around Banner is smarter than the impossible task of trying to go through him. But Banner adjusted well. They want to shoot the gap? Ride them down and wash them away. Let me show you what I mean.

Best moment to highlight this came on Jaylen Samuels’ 22 yard rush. Who provided the key block? Banner. The three tech (linemen between guard and tackle) shoots his gap. He simply washes him down, using his size to keep him from getting through the gap. Samuels’ adjusts his path well enough to run off Banner’s hip while TE Kevin Rader sets his hips enough to create the final part of the lane, though the defender he’s working against has edge responsibility and primary job is to not let the back bounce the run.

Samuels is through the 2nd level and free for a big gain.

Same idea later in the game though we don’t get as nice a look at it. Defender wants to shoot his gap, Banner rides him out, and Trey Edmunds runs off his hip. Gets through the first level free.

Now let’s look at Banner using those assets in pass protection. Working on the LDE here. He gets beat initially, the defender ripping through. Most times, the battle is lost.

But Banner works hard to not give up, run his feet (even if that means giving up his base, who cares, at this point, just block it up), and get into the inside shoulder of the end. Using his length and strength, he’s able to drive the end upfield, securing the pocket, and kudos to Josh Dobbs for having the presence of mind to climb while keeping his eyes downfield.

Although Jerald Hawkins had a better game than I honestly expected, Banner still has a stranglehold on a spot on the main roster. It’s all thanks to getting his weight under control which has finally allowed him to play to the talent that got him drafted in the 4th round of the 2017 draft.