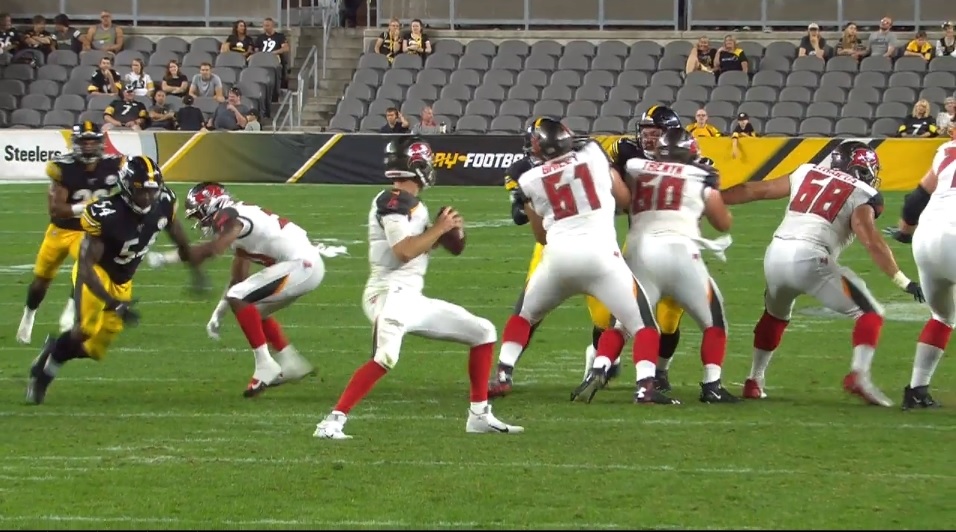 It’s the highlight of camp. First day in pads and Friday Night Lights. Backs on ‘backers. One linebacker. One running back. May the best man win.

A drill that gets fans excited and the headline of any camp article that night (including our own). But it’s not done just for show. Any coach worth their weight makes all their drills translate to the game. Design a drill that doesn’t replicate an in-game scenario and you’re just wasting everyone’s time. Yours, the rest of the coaching staffs, and most importantly, the players.

Friday night’s win over Tampa Bay showed why that drill has such value. Few teams rush their inside linebackers as often as the Steelers and they routinely got pressure in the opener. Two plays illustrate that and the importance of backs on ‘backers. So let’s take a look.

First one. Late in the first half. Tyler Matakevich’s forced fumble. Five man rush. D-tackle over the right guard slants down to draw the guard while the LOLB rushes wide to occupy the tackle. Creates the one-on-one with the back for Matakevich through the B gap. That’s the backs on ‘backers drill.

And Dirty Red wins the battle. Quick swim over the running back, who leans forward and fails to square him up. Matakevich wins, bends the corner, and knocks the ball out of the QB’s hand. Isaiah Buggs shows good ball awareness and falls on it.

Same thing late in the game by rookie LB Ulysees Gilbert III. Same concept. Five man rush. Tackle slants away, ROLB stays wide, matchup on the back in the B gap. Gilbert does the same thing as Matakevich, swimming over, and forces the quick throw. Impact forces a lame duck and underthrown deep ball that’s incomplete and could’ve been picked off.

I noted a similar play of Gilbert’s during Tuesday’s practice of team sessions.

“15. Hodges hits Rader over the middle, dragged down by Dangerfield. 13 yard gain. Gilbert swam over McMillan to get pressure.”

It was the same idea. Gilbert one on one with the back, swimming over, and beating him.

That’s how you practice. Rep hand use in individual work, apply it to one-on-one (backs  on ‘backers), blitz your LBs in team drills to do it at full speed within the structure of the entire defense, and then let them loose on gameday and watch that work payoff. Good coaching and great plays from those two linebackers.