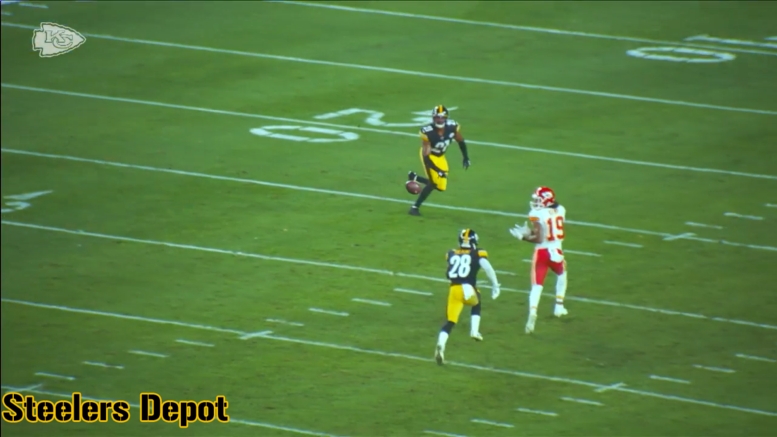 Mike Hilton entered this season, his third official year in the NFL, hoping to convince the Pittsburgh Steelers that he was worth giving a new contract to, even though he was only an exclusive rights free agent whose only choice was to sign his tender or not play, revisiting the same situation next year.

Truth be told, I don’t think his play at cornerback so far this preseason has earned him any favors with respect to his long-term viability as a slot defender in coverage, which is primarily what I’m going to look at below. It’s interesting to note, however, that he played well at safety in the second half of last week’s game. I’m going to look at that separately later in the week.

Some of his play at cornerback in the first half, though, was a bit rough, giving up some big plays, but they started him out blitzing. Here is his blitz on the second play of the game. He did well given the circumstances, but he was also pointed out early and had to back off initially before lining up a second time at the snap.

Hilton was targeted three times as the primary defender on deep passes, with Chad Henne at quarterback. He gave up big plays on two of them. This is the one that resulted in an incompletion. On first and 15, he looked for his slot target, Mecole Hardman, down the seam, but the pass was off-target. You can see that Sean Davis, stepping up, had the best shot of being near the ball. An on-line pass probably would have seen Hardman get leveled by Davis, but Hardman still had the inside position.

He had a rough go of it in the final five minutes of the half, getting burned deep twice for big plays. The first came on third and 12 from midfield, simply getting beat by Marcus Kemp off the line of scrimmage, who quickly won inside leverage and then sped past the defensive back from out of the right slot. 27 yards later, Davis had to take him down.

The defense looked like it would make a stand after that, starting with a Bud Dupree sack, but a couple of plays later, it would be Hilton beaten for a second time on third and long, this one needing 15 yards, and finishing in the end zone for a 17-yard touchdown, Hardman the recipient. In this instance, his footwork was awkward and he failed to drop back to the appropriate depth. He gave up a touchdown to the Chiefs last year under similar circumstances.

Hilton at cornerback did play the run better and blitz than he did in coverage, but we know that he was always said to have a complete game. In order to have a long-term future as a slot defender, however, he needs to do better than this in coverage, where he looked as though he was overmatched multiple times.

It leads me to wonder if his future isn’t actually at safety, and if this opens the door for Cameron Sutton to play some in the slot, or for Artie Burns to get on the field with Steven Nelson playing inside. That’s really jumping the gun and would be an overreaction to this one game, to be sure, but what if the next two games look similar?

Sutton has had a strong camp and they want to get him on the field, meanwhile Kameron Kelly was used in a nickel defense with Hilton on the bench that the latter said he expects to see throughout the season.