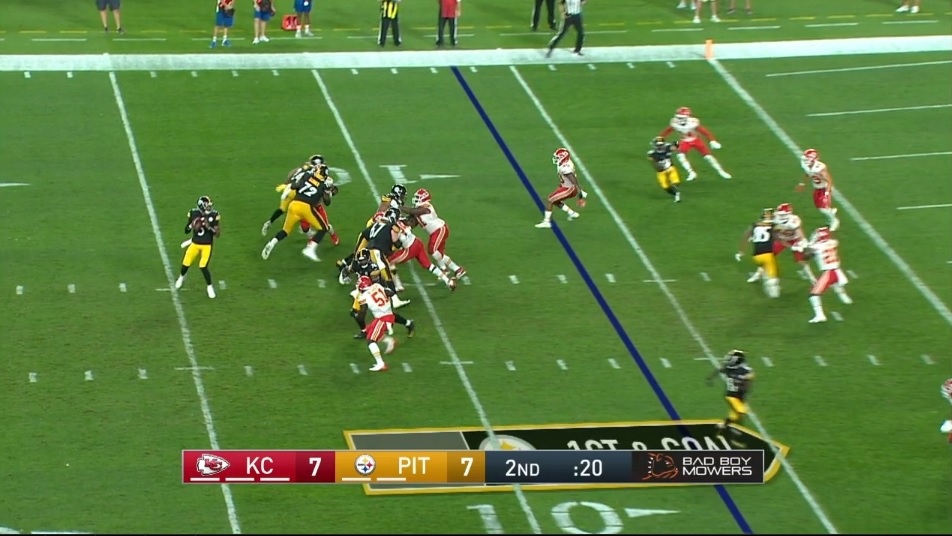 Josh Dobbs didn’t have a terrible game Saturday night. He showed off his arm, his legs, and moved the football.

So why does it feel like he’s slipping in the quarterback battle?

It’s the one issue that’s always plagued him. And showed again versus the Kansas City Chiefs. The problem? Accuracy. Particularly, one shallow crossing routes where he has to lead his target. It happened twice yesterday, one that ended with serious consequences.

After driving the offense down to the Chiefs’ six yard line, a tie game at the end of the half, Dobbs threw an ugly interception that cost the team taking the lead before the break. He wanted to hit Diontae Johnson on a crosser but badly threw wide, right into the arms of the Charvarius Ward. Dobbs, to his credit (he’s a good leader) took the blame for the throw afterwards, saying he just missed him, but this play’s gotta be made.

But that wasn’t the only such moment. A few snaps earlier, he had a similar outcome trying to connect on a 3rd down cross to Xavier Grimble.

Perhaps you could be a little more charitable here, Dobbs trying to throw away from the defender, but Grimble had no chance to make a play on this ball. If this was a one-off thing, you shrug your shoulders and move on, but it’s a consistent issue.

Even though he threw just 12 passes last season, you can still find evidence of this problem. Subbing in for Ben Roethlisberger against the Oakland Raiders, the disaster it came to be, he whiffed trying to hit JuJu Smith-Schuster on the easiest crosser in the world.

Except it wasn’t. Incomplete.

I’m not an expert on QB mechanics. I can’t fully, properly diagnose the problem. Maybe it’s a weight transfer thing. Or his front leg getting locked out. Or, and this is common with accuracy issues, his front toe not pointed correctly, in-line with where the receiver is at as opposed to where he is going.

But it’s definitely a problem and he’s in Year Three. Fixing accuracy is one of the toughest things to work on with a QB. And I don’t know if he’ll ever get there.

Josh Dobbs is a talented player. Some of his traits are impressive. The arm. The mobility. The toughness. His cadence and hard count and decision-making are pretty good too.

Still, a QB without accuracy? That’s like buying a car with the best interior, tires, and brakes but no engine. It looks good but it’s not going to take you anywhere. And it’s why Rudolph looks like a good bet to be the top backup in 2019.