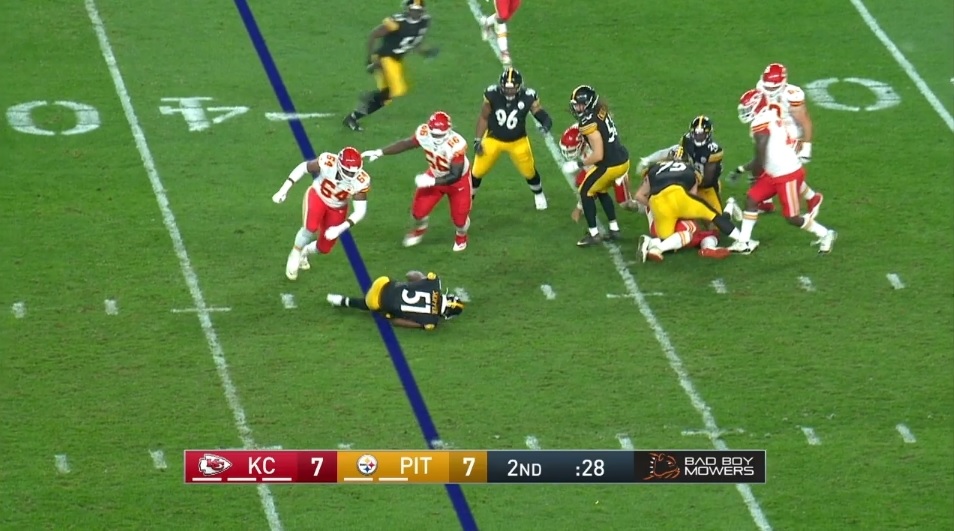 If you attended any training camp at St. Vincent College, the odds are good you heard this line from one of the Pittsburgh Steelers defensive coaches. In fact, I pulled that quote from my Day 8 notes. More than ever, and it makes sense considering how much they failed at it a year ago, the Steelers have placed an emphasis on taking the football away.

It may only be the preseason but so far, the message is paying off. Through two games, the defense has already forced six fumbles. Four of those came Saturday night in the win over the Kansas City Chiefs. And it was a result of the things I saw at St. Vincent College.

Let’s first check out two from Saturday. Terrell Edmunds forced the initial turnover. Flying hard to the ball, he punched through Carlos Hyde and jarred the ball out. Sean Davis recovered.

After the game, he told reporters he saw Artie Burns going in for the tackle so as the secondary player to the ball, his goal was to rip it out. One guy secures the stop, the other goes for the turnover.

Mike Hilton notched another turnover late in the first half. Coming in on a nickel blitz and taking advantage of a botched snap to Chad Henne, he – like Edmunds – came from behind and punched through the ball. Fumble, Tuzar Skipper recovers.

One more example. One that didn’t go down as a fumble but I love the mentality here. The idea of the tackle being wrapped up, now go for the ball. Week 1 versus Tampa Bay. Cam Sutton rides the receiver to the sideline, secures the tackle, and ripped the ball out at the end.

Rip that ball. That’s coaching in action. And I love the attention to detail from Sutton here.

It’s an obvious point we’ve stated many, many times. This Steelers’ defense needs to create more turnovers. That’s why they DBs were on the JUGs machine before and after every practice. And why there’s been such a focus on ripping the ball out. The mandate is 25 takeaways in 2019. Based off what I’ve seen so far, it’s an attainable goal.