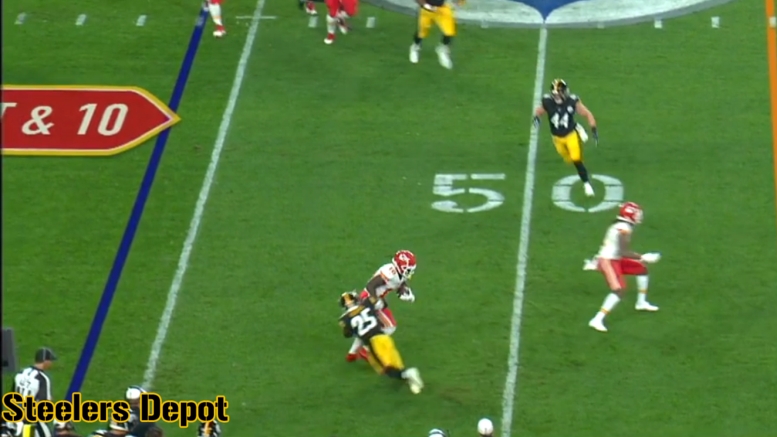 They tend to show up, for example, whenever something negative is written about Joshua Dobbs, or something positive is written about Artie Burns. The former group can take a seat for the time being, but the Pittsburgh Steelers faithful in the latter may want to step forward as I highlight some positive plays from Burns in the team’s preseason victory last week.

Burns started the game after missing the first, playing for the injured Joe Haden, and it didn’t take long for him to get noticed. He made a great open-field tackle on the third defensive play of the game on Tyreek Hill, wrapping him up for a short gain after a quick out. This is particularly notable because he’s gotten beat by Hill on multiple occasions over the past couple of seasons, including by missing such open-field tackles and leading to big plays.

Preseason work is limited without the advantage of all-22 tape, and the biggest victim is the study of coverage. On this play in the middle of the first quarter, Chad Henne missed his mark on a deep pass, but it’s difficult to glean for certain what happens with Burns here. You can see late in the screen that he turns his hips to the boundary as the receiver cuts inside. You can see how he recovers, but while still trailing, he does so reasonably well.

Late in the first half, he was isolated in man coverage on the defensive left side as Henne looked to the end zone for Mecole Hardman, incomplete. He was more fluid and in better position this time as the ball landed harmlessly in between himself and Sean Davis patrolling the middle of the end zone.

A few plays after that, he came in on a blitz and was able to elevate himself in to the throwing lane and bat the ball down. Not a coverage play, but everybody needs to be able to blitz in the Steelers’ defense, and plays like this can cause ricochets that lead to turnovers.

I do think it’s a bit worth noting that Burns played and looked comfortable on the left side, whereas he previously played throughout his career in Pittsburgh on the right side. Now as a backup, he needs to have that versatility, and it would be nice potentially to even see him get some work inside over the final two preseason games.