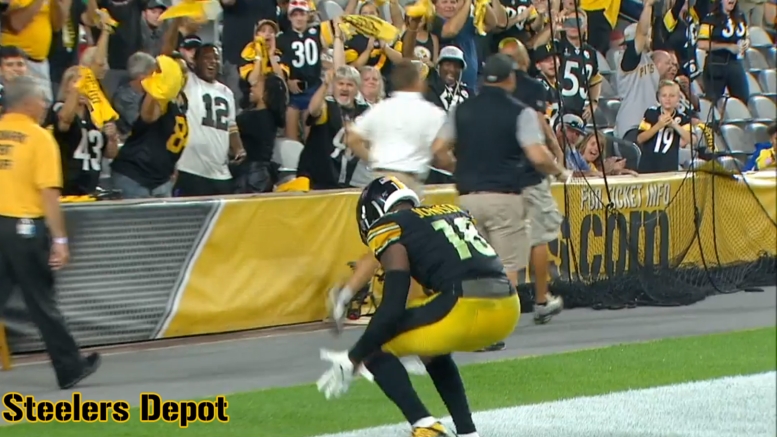 The Pittsburgh Steelers had to wait an extra week for the debut of rookie wide receiver Diontae Johnson, who sat out the preseason opener with an injury, but it appears to have been worth it. The third-round pick out of Toledo certainly had his adventures, but he made some plays on offense toward the end of the game to flash his ability, something the coaching staff is sure to be happy to be able to see inside of a stadium.

He finished the game with three receptions for 46 yards and one touchdown on five targets. He also had a touchdown earlier in the game that was taken away by an offensive pass interference penalty. Head Coach Mike Tomlin challenged the ruling, but it stood. I believe any on-field call in that situation would have stood, either a flag were thrown or not.

He did have a bit of adversity on special teams in particular, though. He returned a punt just six yards early in the game, and he muffed it on his next attempt five minutes later, deep in Steelers territory. He was fortunate to recover it, but his hands are not a new issue. He has bobbled returns even back in college, and has some drops offensively as well in his history, including training camp.

The first offensive touch of his career came in the middle of the second quarter, an eight-yard gain on a pick play with Eli Rogers the dagger in front, to convert for a first down to the 14-yard line, Jaylen Samuels scored on the next play.

Dobbs did complete the would-be touchdown to Johnson for a 24-yarder before giving way to Devlin Hodges, who tossed the rookie his two other completions that went on record. The first picked up 14 yards on third and five, first breaking inside before coming back for the catch at the sideline.

Watch this TD route as I've slowed it. CB is an inside shade & Diontae Johnson sells the first part of the double move great before sinking & breaking it up. Notice him fight through, around & on top of contact & then finds the ball. Good stuff. #Steelers pic.twitter.com/gJISY9CB6h

He finished off the drive with a fantastic diving 24-yard touchdown reception to make up for the one that didn’t count, though to be honest, I’m not sure if this one should have counted either. The ball did touch the ground and shift, but it was decided that there was insufficient evidence to overturn it.

Either way, it counted, and it was still a display of his abilities, not only on the route, but on his effort to make the play. Johnson clearly flashed some of the things that Steelers and wide receivers coach Darryl Drake were excited about when they drafted him in April.