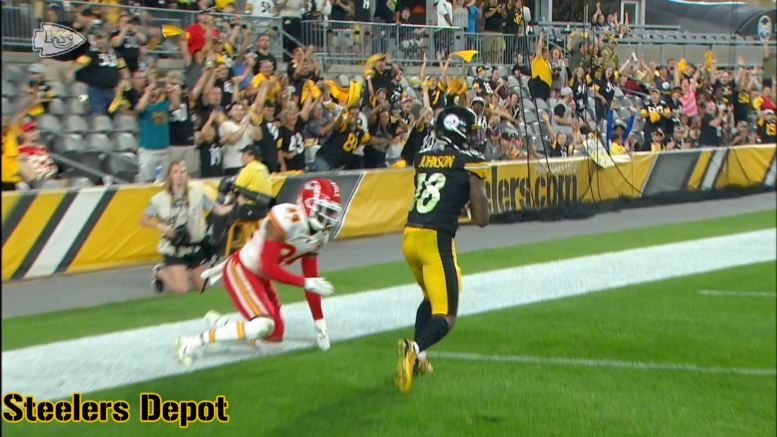 When you spend enough time in close quarters with somebody, you tend to get close. For the most part, position coaches grow to have an affinity for the men that they work with, and vice versa. When it comes to Pittsburgh Steelers rookie wide receiver Diontae Johnson, however, he already felt that bond with Darryl Drake before they even drafted him.

“Once I met him at my Pro Day, we clicked, and I just felt like that was my guy”, he told Dan Scifo of the Associated Press. “He still is my guy to this day”. Drake passed away suddenly last Sunday morning at the age of 62 at Saint Vincent College after complaining of chest pains earlier in the day.

He went for tests, however, which showed no abnormalities, and he returned to work. That included a position meeting with the wide receivers that night. ‘Shut Out the Noise’ is one of the last things those players ever heard him say as a result of that.

Johnson was the Steelers’ first of two third-round draft picks in the 2019 NFL Draft, acquired via the Oakland Raiders as part of the trade that sent Antonio Brown out west. Pittsburgh also received a fifth-round pick in the deal, which was used to select tight end Zach Gentry.

The rookie wide receiver out of Toledo was a favorite of Drake’s coming out of the draft, an he pushed the team to select him where they did, after trading their second-round pick as part of a deal that allowed them to move up in the first round to select Devin Bush.

Bush had an impressive preseason debut, but Johnson had to wait a week before he could make his due to injury. When he did finally play, just several days after Drake’s passing, he made an impact, catching three passes for 46 yards and a touchdown.

“That touchdown was for Coach Drake”, he said. Johnson also had an earlier 24-yard touchdown that was called back due to offensive pass interference, though he denied pushing off the defensive back. “Every touchdown I score this year is going to be for him”.

The Steelers will be honoring Drake year-round by wearing a helmet decal bearing his initials. He was originally hired by the team at the outset in 2018 following the retirement of Richard Mann. He had been with the Arizona Cardinals, but with Steve Wilks being fired as head coach, the position coaches were allowed to vacate their contracts.

The other wide receiver that Drake had a hand in drafting, 2018 second-round pick James Washington, has been one of the top performers of the preseason with eight receptions for 162 receiving yards and one touchdown. He is one of two players this preseason to have multiple receptions of 40 or more yards, and his seven receptions for a first down are third-most.