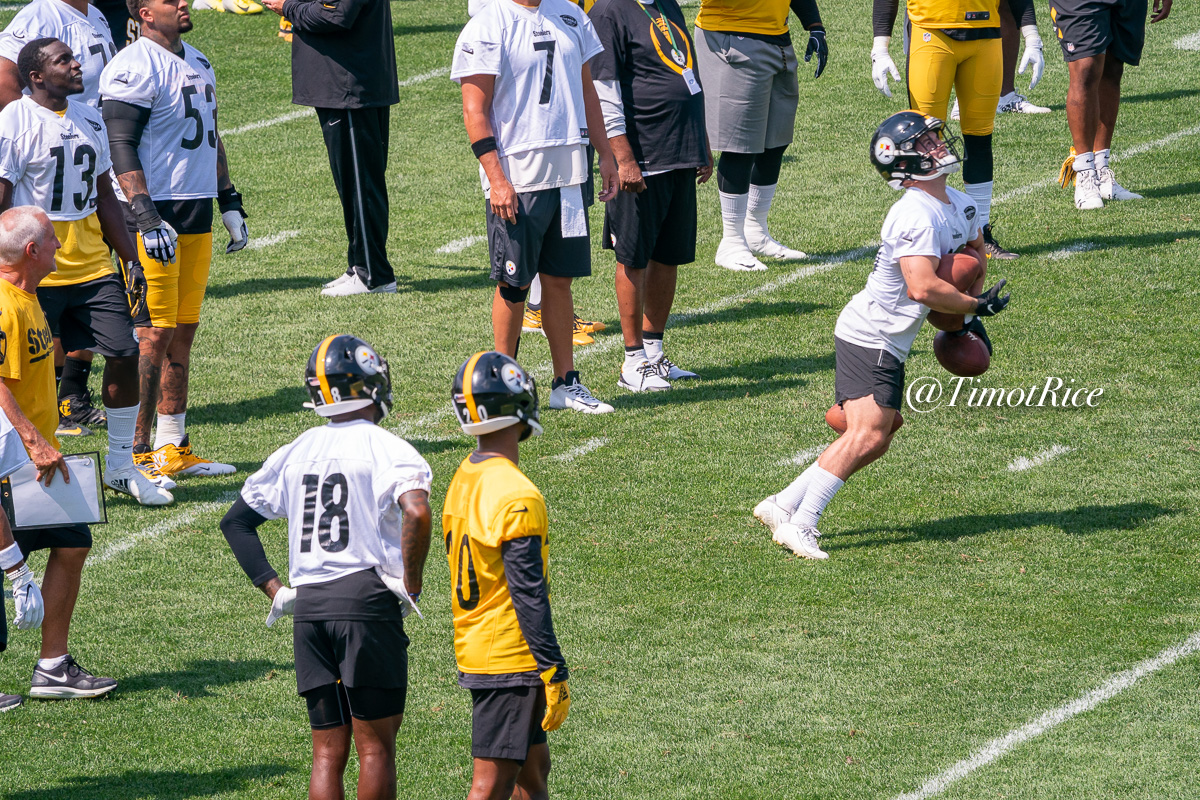 Who will wind up being the Pittsburgh Steelers kickoff and punt returner in 2019? Lat season wide receiver Ryan Switzer handled both of the roles but the overall results and averages left a lot to be desired moving into 2019. While Switzer is expected by many to retain those duties again in 2019, others wonder if rookie wide receiver Diontae Johnson might at least be able to take over as the team’s kickoff returner due to how well he did in that same role during his college career at Toledo.

During his annual interview with Pat Kirwan and Jim Miller of ‘Movin’ the Chains’ on SiriusXM NFL Radio on Friday, Colbert was asked to talk about both Switzer and Johnson and if he thinks the latter can push the former to be the team’s returner in 2019.

“Yeah, we picked Ryan up, you know, during training camp, and he was, as Coach [Mike] Tomlin likes to say, he got on that moving train and was trying to catch up,” Colbert said of Switzer. “And he was force-fed into the offense because we we’re getting ready to play. I forget which week it was, but he came in and had to learn it quick. And he got Ben’s confidence real quick. We had little packages with him even as a running back, because he was a high school guy. And he did a good job, consistent in the return game, so he’s established himself as a guy.”

“Diontae is going to come in and push him because Diontae’s natural return guy,” Colbert said. “But again, it’ll depend on how they can contribute within the offense and then hopefully they’re able to compete and push each other. Eli Rogers is the same way because Eli’s done punt returns, too. So it’s a little deeper group than we’ve had. So they’ll sort it out.”

Colbert also talked earlier in the interview about how Johnson might not contribute on offense as much and as early during his rookie season as many people seem to think right now.

“Diontae Johnson is exceptionally quick, but he’s still obviously learning the scheme,” Colbert said. “His hands are good, but he’s got to grow some physically. But you’ll see, I think he’ll be able to contribute.”

While Colbert wasn’t asked to comment about fellow wide receiver Eli Rogers when asked about who will potentially win the returner job in 2019, Colbert volunteered information on the former undrafted free agent out of Louisville just the same.

“Eli Rogers is the same way because Eli’s done the punt returns, too,” Colbert said. “So it’s a little deeper group than we’ve had, so they’ll sort out.”

Colbert also want asked about wide receiver Diontae Spencer, who is attempting to make the Steelers roster this year after four productive seasons in the CFL. Spencer’s successful resume as a returner dates back to his college career at McNeese State where he registered 29 punt returners for 258 yards and a touchdown in the 43 games that he played in to go along with 41 kickoff returns for 1,117 yards and 2 touchdowns.

In the last four seasons in the CFL, Spencer registered 191 punt returns for 2,162 yards and 2 touchdowns, good for a 11.3 average. He also returned 90 kickoffs during those same four seasons for 1,977 yards, a 22 yard average. In short, Spencer will likely get a few punt and kickoff return opportunities for the Steelers during the team’s preseason games. He’s also not a bad slot wide receiver to boot.