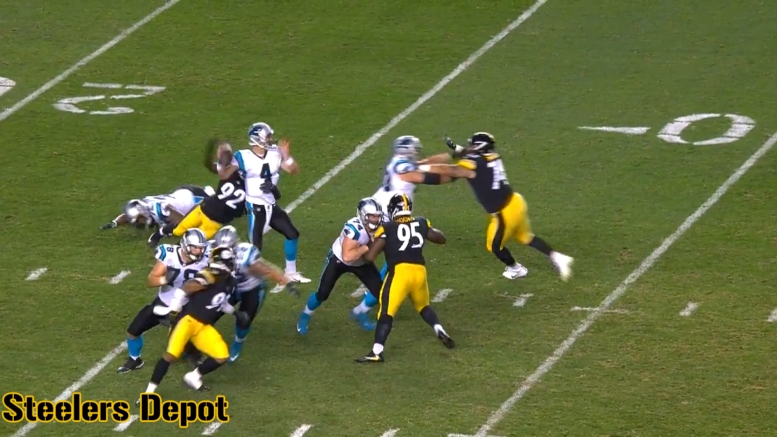 Explanation:  The Steelers are looking to bolster their pass-rushing depth, and second-year Adeniyi is the best candidate to do that based on his rookie preseason, during which he recorded three sacks. He has received glowing praise for the progress he has made in his second stint at Latrobe; given the hype, it’s reasonable to think that recording more than one sack is within his capability.

Bud Dupree doesn’t look as though he is going to be out there tonight. That should mean there will be additional reps for Adeniyi. It’s still a question as to how much T.J. Watt will play, even though he was a full go at practice by the end of the practice week.

Still, Adeniyi and Anthony Chickillo are likely to take the lion’s share of snaps, and based on what the former has been doing to tackles in training camp, he’s certainly going to get into the backfield multiple times during the game. It’s just a matter of finishing, or helping to finish, a couple of them.

He looked to be a good finishing with his work in the preseason a year ago, so I don’t think that’s a concern. He has good hand usage as he works his way around the arc, which enables that tomahawk thrust to dislodge the ball and aids in sack production.

If Adeniyi is going to be getting earlier playing time than he did last preseason, then that also means he is going to be facing stiffer competition, and the Buccaneers’ Donovan Smith at left tackle is a solid player. He is coming back from an Achilles injury, but appears to be in-line to play.

Adeniyi did record three sacks last year, but all three were in different games. It’s difficult to ever predict a multi-sack game, especially in the preseason when there are a number of variables that can come into play, such as playing time. It would obviously be nice to see him put a couple of quarterbacks on their backs and come out of the gate looking like the Steelers’ next great blind-side pass rusher, but while it’s a possibility, the odds are against it.