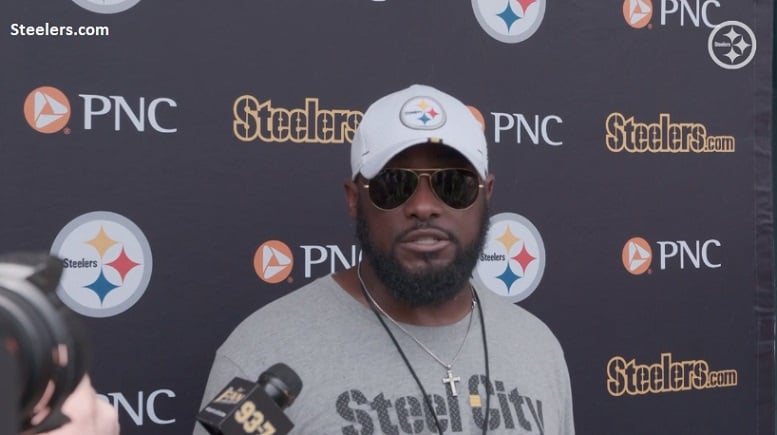 The Pittsburgh Steelers will play their 2019 preseason finale Thursday night against the Carolina Panthers and come Saturday evening they will need to have their initial 53-man active roster set. While most of those 53-man roster spots are seemingly already locked up barring injuries, a few of the remaining ones figure to still possibly be up for grabs entering Thursday night.

Most of you reading this post probably already have a final Steelers 53-man roster prediction in your head. I know I do and I plan on posting mine as soon as possible on Friday. If you are looking for clues as to how the Steelers 53-man rosters for Week 1 have been structured in the past under head coach Mike Tomlin, below is a quick and dirty breakdown by year as to the total numbers the team has kept by position groups.

Below the chart are a few interesting observations related not only to the chart, but how they might apply to this year’s 53-man roster. 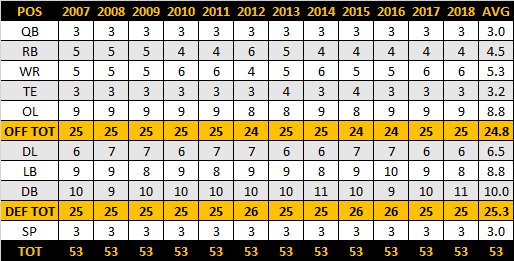 Guard Fred Johnson is another player that several debate when it comes to him making the Steelers 53-man roster this year. While the Steelers have kept just eight total offensive linemen in past years under Tomlin, odds are good that nine will be the number once again this year. If you are hoping that Johnson will be cut so that Skipper can be kept as a 10th linebacker, the Steelers have never had a Week 1 combination of eight offensive linemen and ten linebackers in Week 1 under Tomlin.

When it comes to defensive lineman, the Steelers have never had less than six of them on their Week 1 roster under Tomlin. Keeping seven this year seems like quite a stretch so count on six being the number barring something like an injury taking place Thursday night.

Would the Steelers consider keeping five total running backs and fullbacks? The only way something like that might happen this year is if rookie running back Benny Snell Jr. is kept in addition to fellow running back Trey Edmunds, who has more value on special teams than he does as a running back. In short, the Steelers are likely to choose between Snell and Edmunds with the former having a chance to secure his roster spot Thursday night with a good all-around showing.

When it comes to defensive backs, history has shown us that ten is likely going to be the final number this year even though 11 were surprising kept a year ago to open the season.

Three quarterbacks on the Steelers 53-man roster has been the standard for a long, long time now so if you’re hoping that it will change this year to open up a roster spot elsewhere, you’re probably wasting your time.

Injuries sustained in the Thursday night preseason finale can obviously wind up having a big impact on the initial 53-man roster and especially if they are long-term injuries but not season-enders to key players. For players to be eligible to return later in the season after being placed on the Reserve/Injured list, they mist first by on the initial 53-man roster and then moved to IR ahead of the team’s Week 1 game.