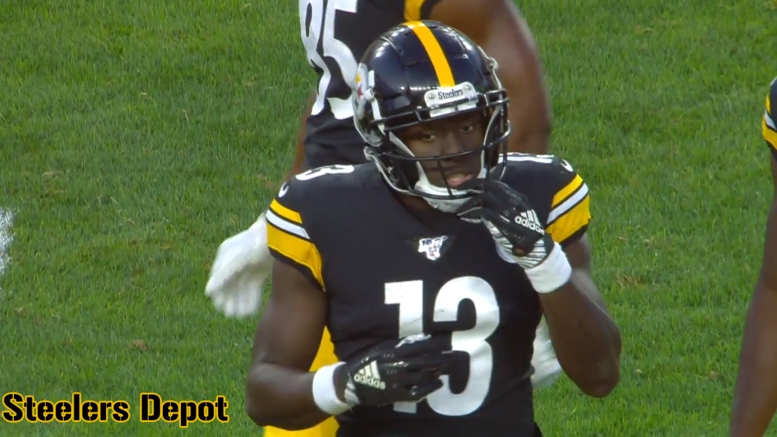 For the past several years, much of the Pittsburgh Steelers’ offense has been filtered primarily through superstar skill position players. Both running back Le’Veon Bell and wide receiver Antonio Brown, a pair of first-team All-Pro talents, have at times accounted for more of their team’s yardage than any other two players on the same team around the rest of the NFL.

Both of them are gone now, and while they have Pro Bowl replacements in James Conner and JuJu Smith-Schuster, respectively, that sense of ‘hero ball’, to borrow an admittedly misappropriated basketball term, is no longer there. That goes especially for the wide receiver position, something that quarterback Ben Roethlisberger spoke to yesterday.

Smith-Schuster was top-five in targets last season, finishing the year with 111 receptions for 1426 yards and seven touchdowns. That’s obviously a lot of attention, and it’s hard to imagine he’s going to get much less this year. But they have a larger cast of characters they trust this year, and Roethlisberger intends to utilize them, both in Sunday’s preseason game and during the regular season.

“I am going to try and get on the field as many of them as possible”, he told reporters about the next game, per Teresa Varley via the team’s website. “I think we are going to try and rotate receivers in. I think everyone will get a little bit of time”.

In the last preseason game, the Steelers opened with Smith-Schuster and Donte Moncrief, with Eli Rogers in the slot. James Washington was next in line, and then came the likes of Ryan Switzer, Diontae Johnson, Tevin Jones, Diontae Spencer, and Johnny Holton.

With Roethlisberger under center, the plan is to rotate the wide receivers and get as many in the game as possible, perhaps in part to give them a feel of working with the number one group inside a stadium. Of course, they’ve gotten shuffled in during practices, but stadium work has a different feel to it, and that will mean something in September.

“We want to be able to play that way this year”, he said. “We don’t want to just have guys be on the field and wear themselves out. I am emphasizing that when we do our two minute, no huddle. If you need a quick breather, just take one. We have guys who can step up, step in and be ready to go”.

As of this moment, it seems most likely that the wide receiver depth chart will consist of Smith-Schuster, Moncrief, Washington, Johnson, Rogers, and Switzer, but either of the latter two could become vulnerable to a Spencer or Holton over the final two weeks. All of them have made plays in one form or another during the preseason.

My expectation is that Johnson will take his time being worked in, and if they dress five wide receivers, he may even begin the year inactive. His sporadic minor injuries don’t make that any less likely. But if they find a way to dress everybody—say, by dressing only two tight ends—then they can get everybody into the mix.